From a £3 million legal bill to Coleen Rooney’s Hollywood lawyer and Rebekah Vardy’s post-case interview with Piers Morgan : All YOU need to know about the Wagatha Christie court battle

As Rebekah Vardy and Coleen Rooney prepare to step into the High Court for a libel trial that could cost £3million, FEMAIL explains everything you need to know about the ‘Wagatha Christie’ case.

Mrs Vardy, the wife of Leicester City striker Jamie Vardy, is suing Wayne Rooney’s wife over her claim in 2019 that Mrs Vardy had been leaking ‘false stories’ about her private life to journalists from The Sun newspaper.

Mrs Rooney was nicknamed Wagatha Christie after staging an elaborate sting operation in which she posted made-up personal titbits on social media to a diminishing number of people and, eventually, she believed, solely to Mrs Vardy.

She then waited for them to appear as news stories. Mrs Vardy denies the allegations and is suing Mrs Rooney for libel.

Here, FEMAIL looks back at everything you need to know ahead of the trial…

Here, FEMAIL looks back at everything you need to know ahead of this week’s trial…

How did it all unfold? 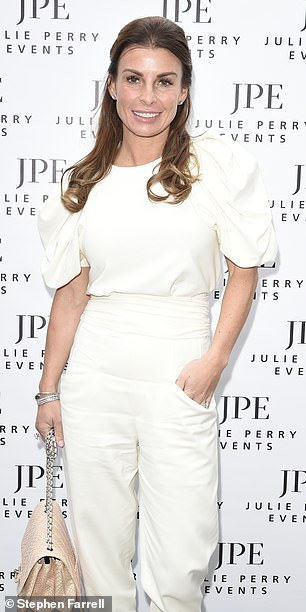 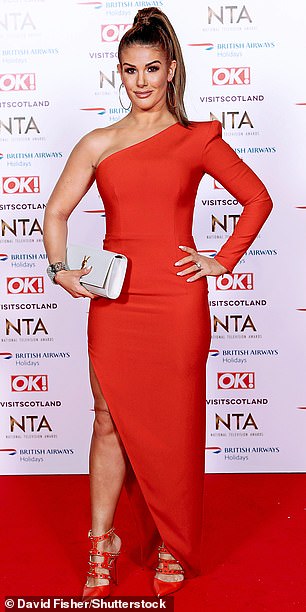 Coleen Rooney pictured as she arrived for the Tanya Beardsley’s Mental Mummies Charity Lunch at The Bridge in Cheshire, last month, left, and right, Rebekah Vardy pictured at the 23rd National Television Awards in London in 2019

She explained that she had posted a series of fake stories about herself to her personal Instagram account.

Three stories had been shared with The Sun newspaper – including one about traveling to Mexico to find out about gender selection, another regarding a return to TV and a final story about the basement flooding at her new home.

Hoping to find the account responsible for sharing these false stories, Mrs Rooney explained that she had changed the privacy settings of her posts so it was visible to just one person’s account – Mrs Vardy’s.

‘For a few years now someone who I trusted to follow me on my personal Instagram account has been consistently informing The SUN newspaper of my private posts and stories.

‘There has been so much information given to them about me, my friends and my family — all without my permission or knowledge. After a long time of trying to figure out who it could be, for various reasons, I had a suspicion.

‘To try and prove this, I came up with an idea. I blocked everyone from viewing my Instagram stories except ONE account. (Those on my private account must have been wondering why I haven’t had stories on there for a while.) 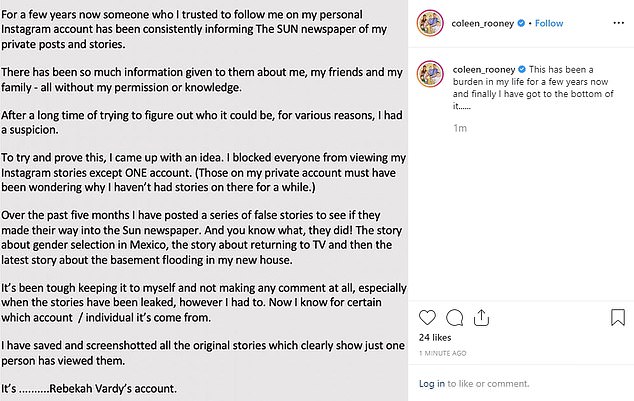 On October 9, 2019, Coleen Rooney, now 36, accused Rebekah Vardy, 40, of leaking ‘false stories’ about her to the press in an Instagram post (above) 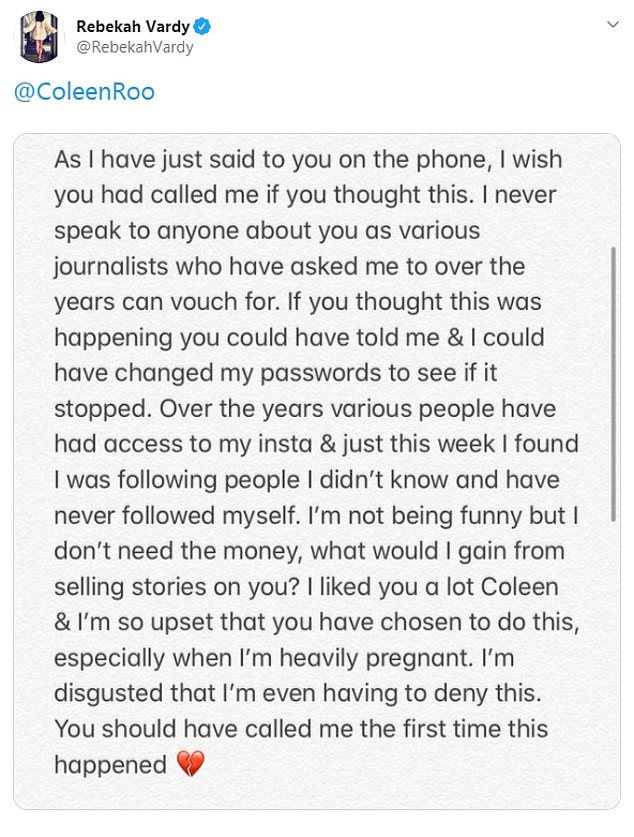 Shortly after Mrs Rooney’s public allegation, Mrs Vardy – who was pregnant and on holiday in Dubai at the time – denied any involvement (above)

‘Over the past five months I have posted a series of false stories to see if they made their way into the Sun newspaper. And you know what, they did! The story about gender selection in Mexico, the story about returning to TV and then the latest story about the basement flooding in my new house.

‘It’s been tough keeping it to myself and not making any comment at all, especially when the stories have been leaked, however I had to. Now I know for certain which account/individual it’s come from. I have saved and screenshotted all the original stories which clearly show just one person has viewed them.

Caroline Watt is a former Virgin Atlantic air hostess who has been Rebekah Vardy’s agent for the past seven years, helping to build her profile in the national media.

Reports that she no longer represents her following the current controversy engulfing the two have been dismissed as inaccurate with Ms Watt remaining close to Ms Vardy both professionally and personally.

Ms Watt, 39, is married to former footballer Steve Watt, who played for Chelsea, making one Premier League appearance for two minutes in 2005 and Swansea City. He is currently manager of Kent non-league side Hythe Town and they have two children.

After leaving the airline industry, Ms Watt began working as an agent in the world of entertainment, quickly developing a reputation for her communication skills and ability to network.

She was formerly employed by talent agency The Frontrow Partnership but left in 2019 to go it alone and took her main client and close friend, Ms Vardy with her.

Ms Watt has been credited with building Ms Vardy’s public profile by ensuring that she regularly featured in the national media and also brokered the deal for her to appear on the hit reality TV show I’m A Celebrity… Get Me Out Of Here! in 2018.

She is a regular visitor to the Vardy’s Lincolnshire home and also socialises with Ms Vardy, attending glitzy parties and bars.

Her other clients include the former Page 3 girl Nicola McLean but it is Ms Vardy that has been the biggest asset in her career as an agent.

But shortly after Mrs Rooney’s public allegation, Mrs Vardy – who was pregnant and on holiday in Dubai at the time – denied any involvement.

She hit back on social media, writing: ‘As I have just said to you [Rooney] on the phone, I wish you had called me if you thought this.

‘I never speak to anyone about you, as various…

US retail sales rise 0.9% in April in face of sky-high inflation

Amie Walton, from Birmingham's, heartburn turned out to be bowel cancer Like Dame Deborah James she is fundraising for £2k-a-month treatment She wants to...
Read more
Celebrity

Amanda Holden and Alesha Dixon enjoyed the ultimate girls' lunch on Monday as they joined Simon Cowell's fiancée and some other pals at a...
Read more
Celebrity