An investigation found that these schemes could potentially unleash some 646 billion tonnes of CO2 emissions, with around 60 per cent of them already producing oil and gas.

Campaigners say the other 40 per cent of projects that have not yet started must be stopped if the world is to avoid a climate catastrophe.

If the expansion plans continue unabated, the analysis reveals, they will produce greenhouse gases equivalent to a decade of CO2 emissions from China, the world’s biggest polluter. 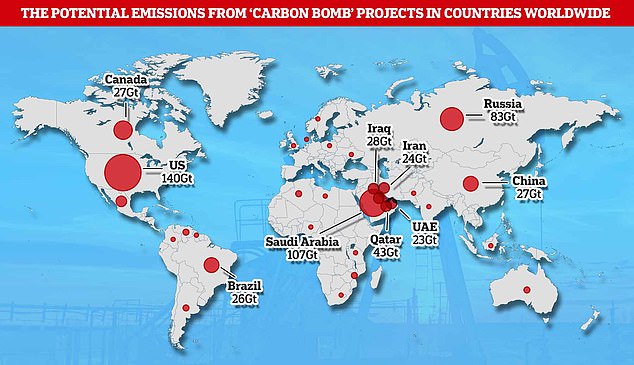 An investigation found that these schemes (pictured by country) could potentially unleash some 646 billion tonnes of CO2 emissions, with around 60 per cent of them already producing oil and gas

The Paris Agreement, first signed in 2015, is an international agreement to control and limit climate change.

It hopes to hold the increase in the global average temperature to below 2°C (3.6°F) ‘and to pursue efforts to limit the temperature increase to 1.5°C (2.7°F)’.

It seems the more ambitious goal of restricting global warming to 1.5°C (2.7°F) may be more important than ever, according to previous research which claims 25 per cent of the world could see a significant increase in drier conditions.

The Paris Agreement on Climate Change has four main goals with regards to reducing emissions:

2) To aim to limit the increase to 1.5°C, since this would significantly cut risks and the impacts of climate change

3) Governments agreed on the need for global emissions to peak as soon as possible, recognizing that this will take longer for developing countries

Under the global 2015 Paris climate treaty, countries pledged to curb temperature rises to 3.6°F (2°C) and pursue efforts to limit them to 2.7°F (1.5°C) above 19th century levels to avoid the most dangerous impacts of climate change.

Findings from the United Nations last year suggested the world needs to cut its production of coal, oil and gas by more than half in the coming decade to even have a chance of meeting the Paris Agreement’s strict climate standards.

But research shared with the Guardian flies in the face of this, revealing that the dozen biggest oil companies are on track to spend $103m (£84m) a day for the rest of the decade exploiting new fields of oil and gas.

However, these cannot be burned if global warming is to be limited to under 3.6°F (2°C).

Data from the thinktank Carbon Tracker suggests that 27 per cent of the companies’ projected investments are incompatible with this.

The new research, which was led by Kjell Kühne from the University of Leeds, defines carbon bombs as ‘projects capable of pumping at least 1 billion tonnes of CO2 emissions over their lifetimes’.

The huge North Field gas fields in Qatar are named in the study as the biggest new oil and gas carbon bomb in the world.

Researchers also found that the US is the leading source of potential emissions, with 22 carbon bombs that could emit 140 billion tonnes of CO2.

These include conventional drilling and fracking from the waters of the Gulf of Mexico to the Permian Basin.

The 140 billion tonnes of CO2 they could produce is almost four times more than the entire world emits each year.

Saudi Arabia is the second biggest potential emitter after the US, followed by Russia, Qatar, Iraq, Canada, China and Brazil.

Climate campaigners Greenpeace warned in response that ‘while governments dither and discuss, fossil fuel companies are charging full speed ahead with “carbon bomb” projects, pushing us ever closer to an irreversible tipping point.’

‘We need action now,’ the group wrote on Twitter.

He added that it was ‘now or never’ to start slashing emissions and blasted companies and whose climate actions did not match their words.

‘Simply put, they are lying, and the results will be catastrophic,’ Guterres said. 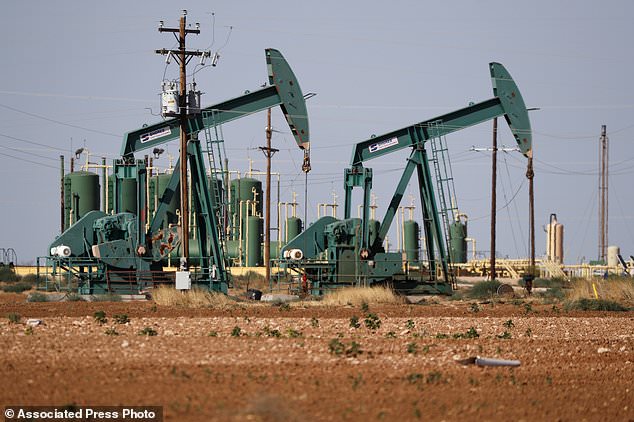 An investigation found that these schemes could potentially unleash some 646 billion tonnes of CO2 emissions, with around 60 per cent of them already producing oil and gas (stock)

According to a separate report from the Stockholm Environment Institute, most industrialized nations plan to increase oil and gas production, and a number are continuing coal extraction

Some Antarctic ice shelves have GROWN in the last 20 years despite global warming, study finds

Some ice shelves in the eastern Antarctic have grown in the last 20 years - studyResearchers say sea ice may have helped to protect...
Read more
Science

Experts from the Wildlife and Countryside Link want gardeners to buy BritishFungi, flatworms, ants and slugs can hitch a ride on foreign soil and...
Read more
Science

We all rave on a yellow submarine! New battery-powered sub has room for 120 revellers to party for 24 hours under the waves

The new party sub has capacity for 120 revellers to get down and jiggy for up to 24 hours under the wavesUnder Water Entertainment...
Read more
Science

Red moon: How to watch the total lunar eclipse tonight

On Sunday night, an eerie red moon will be visible across much of the world thanks to a rare total lunar eclipse.Beginning at 10.27pm...
Read more
Science

Who was James Webb, the controversial man whose name adorns a telescope?

We're burning up,” screamed the crew of Apollo 1 in a garbled transmission as fire engulfed the capsule on its launchpad. The transcript...
Read more
Science

Cats who live together know each other by name, Japanese study finds

Cats who live together with their other feline companions identify and learn each other's names, a new study in Japan has shown.This discovery, made...
Read more
Science

World’s first FARMERS originated from the mixing of two groups of hunter-gatherers brought together by dramatic climate change 12,900 years ago

iPhone 15 could come with a new charging cable! Reliable leaker claims Apple will finally ditch Lightning port for USB-C in its 2023 smartphones

Apple has used a Lightning port in its iPhones since 2012Now, analyst Ming-Chi Kuo claims that's set to change in 2023He says Apple will...
Read more
Science

Prehistoric HUNTING PITS discovered at Stonehenge: Thousands of holes were dug by hunter-gatherers to catch deer and wild boar 10,000 years ago

Thousands of prehistoric hunting pits have been unearthed close to StonehengeArchaeologists think they were dug by hunter-gatherers about 10,000 years agoOne pit, at 13ft...
Read more
Science

Lunar eclipse: How to spot the ‘blood moon’

NASA said that the partial eclipse phase will begin over North America on May 15 The total lunar eclipse will dazzle skywatchers this weekend.The first...
Read more
Science

What your WEIGHT says about your dating intentions: Fat people are seen as more interested in long-term relationships – while slim people appear to...

Participants were shown four male and four female computer-generated bodiesThey either had high or low fat levels and either small or large muscles or...
Read more
Science

Dino-mite sale! 110 million-year-old skeleton of a fearsome dinosaur that inspired the ‘raptor’ in Jurassic Park sells for $12.4 MILLION at Christie’s

The 110 million-year-old skeleton is of apex predator Deinonychus antirrhopusIt was unearthed in Wolf Canyon, Montana, US between 2012 and 2014Deinonychus was a much...
Read more
Science

CAPE CANAVERAL, Fla. — For the first time, scientists have grown plants in soil from the moon collected by NASA's Apollo astronauts.Researchers had...
Read more
Science

How to wash your chicken safely: Physicists say keeping meat near the tap under a steady flow of water reduces the risk of bacteria...

The NHS advises against washing raw chicken, as it can spread harmful bacteriaHowever, research has shown that up to 25% of people still doIn...
Read more
Science

Look out for the ‘Super Blood Moon’ this weekend! Total lunar eclipse on Sunday night will make it appear like a glowing red disk...

Total lunar eclipse on Sunday night will make moon appear like red disk in skyAll of South America and most of North America will...
Read more
Science

The IMAX in your pocket! MailOnline tests EE’s £400 ‘Nreal Air’ augmented reality sunglasses that instantly project a cinema-sized screen in front of your...

EE is set to launch the Nreal Air augmented reality glasses in the UK on May 20, priced at £399.99They look like a normal...
Read more
Science

ISTANBUL — Mass dolphin deaths have scientists worried that pollution from Russia's war in Ukraine could have lasting impacts on ecosystems in the region....
Read more
Science

How restaurants can step up in the fight against climate change: Diners choose more eco-friendly meals when the carbon footprint of each dish is...

Tiny echidna and platypus specimens which showed some mammals lay EGGS and proved Darwin’s theory of evolution are rediscovered in Cambridge University museum 150...

Echidnas and platypuses are thought to have been collected by William Caldwell The Scottish zoologist collected the specimens in Australia back in the 1880sAt...
Read more
Facebook
Instagram
Linkedin
Mail
Twitter
GranthshalaNews