Dr Katherine Henderson, president of the Royal College of Emergency Medicine, today admitted she would be ‘worried’ about family members who needed an ambulance being able to access one in a ‘timely way’

A top emergency medic admitted today that she would consider calling a taxi or giving a lift to a loved one who needed to get to the hospital, rather than call an ambulance.

Dr Katherine Henderson, president of the Royal College of Emergency Medicine, said she was ‘worried’ about family members who needed an ambulance being able to access one in a ‘timely way’.

The medic, who is also an emergency consultant at Guy’s and St Thomas’ trust in London, said she would be ‘looking very carefully’ at alternative ways of getting to hospital if a loved one fell ill, including taxis or getting a lift.

It comes amid an ambulance crisis that has seen some patients told to wait 15 hours for paramedics.

NHS England data today showed ambulance waits fell in April compared to March but were still higher than nearly all other months since records began.

And serious safety incidents logged by ambulance trusts in England skyrocketed 77 per cent in the last year compared to before the pandemic, separate data shows. 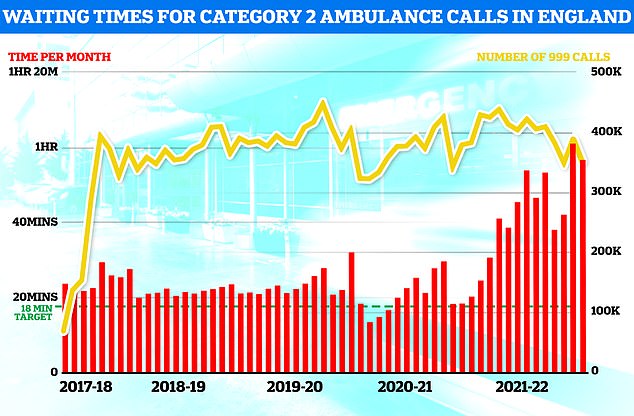 Ambulance figures for April show waits for paramedics fell compared to March but were higher than nearly all other months since records began. Ambulances took an average of 51 minutes and 22 seconds to respond to category two calls, such as burns, epilepsy and strokes. This is nine minutes and 41 seconds quicker than one month earlier

The number of people in the queue for routine NHS treatment in England has soured to another high and record numbers are facing ‘frightening waits’ in A&E.

As the crisis in the health service deepens, official statistics show one in nine people (6.4million) were waiting for elective operations such as hip and knee replacements and cataracts surgery by March — up from the 6.18m stuck in February.

There are now 306,000 who have been waiting for more than a year for their operation, up 2 per cent, and 16,796 have been seeking treatment for more than two years, down slightly.

Sajid Javid, the Health Secretary, has promised to cut one-year-plus waits to zero by 2025, using the 1.25 per cent National Insurance hike that came into effect last month.

Separate data on A&E performance in April shows a record 24,138 people were forced to wait 12 hours or more to be treated, three times longer than the NHS target and the worst figure on record.

Just seven in 10 patients were seen within four hours of arriving at ‘absolutely packed’ emergency departments, a slight recovery from last month, making it the second-lowest rate ever recorded. Medics warned access to urgent care has become a ‘serious issue’.

Health chiefs today pleaded with Britons to get taxis or lifts from people to ease pressures, saying they would be ‘worried’ about loved ones being able to get an ambulance ‘in a timely way’. One mother today told how of how her nine-year-old daughter fractured her skull when she fell off her bike but was told the ambulance wait would be 10 hours — 15-times longer than the 40-minue target.

Asked on BBC Radio 4’s Today program whether she would fear for herself or a loved one who had to dial 999, Dr Henderson said: ‘I would be worried whether it would be possible to get an ambulance to them in a timely way.

‘I would be looking very carefully at what alternatives I had but we shouldn’t have to do that.’

Asked whether this included getting a taxi or a lift, she said ‘exactly’.

Dr Henderson said: ‘This is more serious than we’ve ever seen it. We’ve never broken the commitment to get an ambulance to a patient in a timely way.

‘It’s part of the NHS constitution that we will get care to emergency patients without unnecessary delay.

‘And this is the first time in my career, over 20 years as a consultant, when that has become a serious issue.’

She warned ‘an increasing number of patients’ are making their own way to hospital, with the walk-in queue now including ‘patients who should have come by ambulance’.

This makes it difficult to know who is in the queue and how serious their illness is because they have not been assessed by paramedics who ‘are very skilled at helping us prioritise’, forcing to be ‘very, very vigilant’, Dr Henderson said .

She said: ‘We’ve got big queues, we can’t get flow out of our departments. The reason there is this problem, the underlying reason is that emergency departments are absolutely packed.’

Dr Henderson added: ‘We sometimes start the morning with more patients waiting to go up to the ward than cubicles that we have and that’s at the beginning of the day.

It comes as medics today warned the NHS ambulance crisis has led to a surge in avoidable deaths and injuries — with response times for emergency call-outs at record highs.

Serious safety incidents logged by ambulance trusts in England have skyrocketed 77 per cent in the last year compared to before the pandemic, official figures show.

They are cases in which an error or lack of…

Fitness trainer Chontel Duncan, 32, had five babies in less than six years After giving birth to her youngest, she managed to get in...
Read more
Health

Two more people have been diagnosed with monkeypox in UK in cases not linked to previous infection as disease spreads and hunt for their...

HEALTH NOTES: More than half of patients put up with poor healthcare… and they’re more likely to complain about postal delivery issues

More than half of patients who receive poor medical treatment don't complain.In fact, a survey of 2,500 Britons found that were more likely to...
Read more
Health

Family who can’t get an appointment with an NHS dentist flies 6,000 miles to BRAZIL for ‘cheaper’ check-ups

Stuart Woodmansey, from Yorkshire, hasn't had an appointment 'for years'Brazilian-born wife Kedma can't register herself or son Jacob with a local dentist It means...
Read more
Health

Worldwide, the number of mysterious hepatitis cases under investigation among children has reached 450, the European Center for Disease Prevention and Control said this...
Read more
Health

The cost-of-living increase is forcing patients to avoid buying life-saving medications and equipment, as staff warn the crisis is adding additional pressure to the...
Read more
Health

Two cases of monkeypox identified in England, the UK Health Security Agency announced.The two cases are unrelated to a case found on 7 May,...
Read more
Health

DR ELLIE CANNON: My cancer is terminal… so when can I tell my doctors I am ready to go?

I was recently diagnosed with a very rare, very aggressive incurable cancer. I've been referred to palliative care, but I'm often in so...
Read more
Health

Tens of thousands of women are unable to get their hands on Oestrogel There is a critical shortage of Hormone Replacement Therapy across Britain...
Read more
Health

It is the miracle drug which can ‘turn off’ the cystic fibrosis, but is the ‘Holy Grail’ medicine also triggering depression and suicidal thoughts?

Breakthrough jab to protect over-60s against E. Coli bug behind urinary infections which affect more than one million Britons each year

People over 60 could receive a vaccine to protect against urinary tract infectionThe inoculation will protect people from the E. Coli bug which is...
Read more
Health

Obese children are more likely to lose weight if they live near a grocery store that sells fresh fruit and vegetables, study finds

New York City has been offering tax breaks to stores selling more fresh food since 2009 — after finding a quarter of its youngsters...
Read more
Health

Superdrug has been accused of “cashing in on” on women's “frustrations” over NHS failures to diagnose them as perimenopausal after the health retailer launched...
Read more
Health

Researchers found that around 60% of smokers who were diagnosed with head and neck cancers still smoked cigarettes two years after diagnosis Many try...
Read more
Health

The Tar Heel state reported that it had confirmed nine cases of mysterious pediatric hepatitis on Wednesday, doubling its previous totalThere have been more...
Read more
Health

Anti-drug addiction website used by 300,000 people a month to find treatment could lead to DEATHS because it has ‘invalid’ information, doctor claims –...