THIS is the barbaric moment Putin’s butchers slaughtered two Ukrainian civilians in cold blood as they walked away thinking they had been freed.

Chilling CCTV footage from a motorhome dealership outside Kyiv show how the evil soldiers shot the owner and a guard in the back following a short conversation.

The killings – which have been branded “a possible war crime” – took place on March 16 when Russia made an initial attempt to take the city.

The heart-breaking footage shared with CNN shows how the meeting between the invaders and civilians at The Camper Group dealership on the main E40 into Kyiv appears calm.

The Times reported the soldiers were apparently frisking the men for cigarettes.

But moments after going their separate ways, the cowardly Russian soldiers turn around and hide behind a wall. 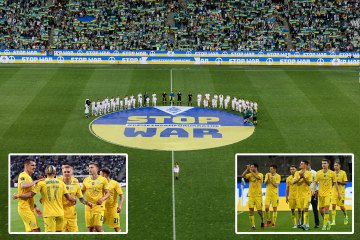 Humiliated Putin has NO CHOICE but back down after ‘appalling miscalculations’

They then jump out, place their guns on a fence and open fire into the defenseless bodies of the men who hit the ground immediately.

Bullets can even be seen sending dust clouds into the air during the execution-style killings.

The butchers kill the owner – who’s family did not want him identified – immediately.

But astonishingly the guard, Leonid Oleksiyovych Plyats, described by his daughter as a “very cheerful” 68-year-old grandfather, initially survived the shooting.

In the footage he is seen limping to a guard hut to call for help, while bleeding profusely from his wounds.

But despite tying what appears to be a tourniquet around his thigh, he suffered catastrophic blood loss and tragically died – just as Ukrainian heroes arrived to try and save him.

The shocking footage shows the blood trail left after Ukrainian soldiers dragged him out to safety but he lost his battle outside of the guard hut.

Ukrainian soldiers did not have the firepower to fight back against tanks and soldiers who then entered the compound.

His daughter Yulia – who cannot watch the video herself – pledged to one day show her grandchildren the footage so they never forget what Russia did to Ukraine and Leonid.

She told CNN: “They are executioners.

“It’s awful because my father was a civilian, he was 68, a peaceful unarmed man.”

More than 325,000 people in England have dementia but are undiagnosed, a new report suggests.The impact of the Covid pandemic has led to dropping...
Read more
Facebook
Instagram
Linkedin
Mail
Twitter
GranthshalaNews