‘I said what I f***ing said’: Carnegie Mellon professor who wished the Queen an ‘excruciating death’ doubles down and calls the hate-filled screed an effort to ‘teach’ Americans about the British monarchy

A Pennsylvania professor said she expects Queen Elizabeth to suffer an ‘excruciating death’, saying in a podcast Wednesday on her controversial comments: ‘I said what I f****** Told.’

Uju Anya, a Nigerian-American professor of linguistics at Carnegie Mellon University, sparked widespread anger with her reaction to the Queen’s final hours.

Jeff Bezos was among those to condemn her tweet, commenting: ‘This is someone working to make the world better? I do not think so. very nice.’

Anya, 46, told the podcast This Week in White Supremacy on Wednesday that she has no regrets over her tweet, which has been taken down by Twitter.

In response to the controversy, Anya tweeted: ‘If anyone expects me to express anything but disdain for the king who oversaw the government sponsoring the genocide that killed half my family dumped and displaced and the consequences of which are still trying to overcome by the living. ‘You can keep wishing for a star.’

Uju Anya, a Nigerian-American professor of linguistics at Carnegie Mellon University, told the podcast in White Supremacy this week that she stood by her controversial remarks about the Queen. 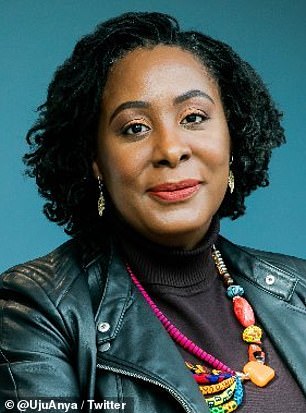 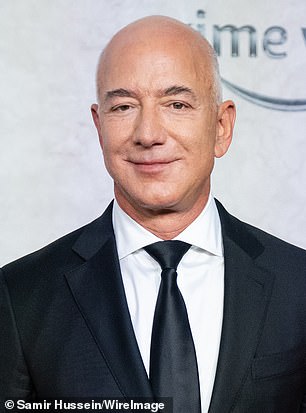 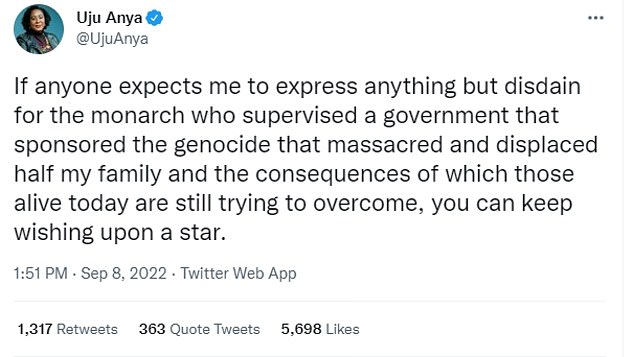 Uju Anya is a teacher and associate professor at Carnegie Mellon University in Pittsburgh, Pennsylvania

Anya’s hatred for the Queen, who died last week at the age of 96, stemmed from her family’s experience in Nigeria.

In 1967 – seven years after Nigeria became independent from the British Empire, and 15 years after the young queen took the throne – civil war broke out in the east of the country.

The Biafra separatists wanted independence for the Igbo people of Nigeria, but were strongly repressed by the Nigerian government, which supplied arms, with the support of the British government.

More than a million people died in the two-year conflict – many of them from starvation.

‘I was blown away by this news.

‘It went deep in pain and trauma for me. Because of my family experience with the rule of this emperor.’ 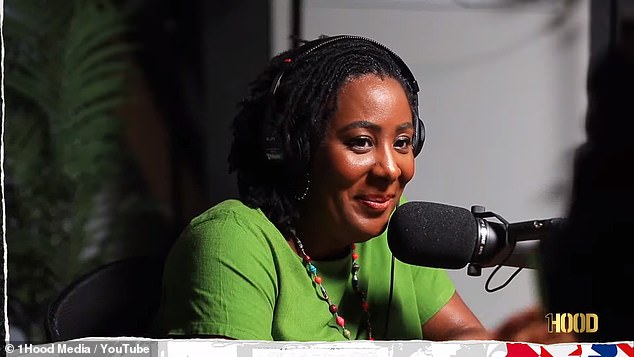 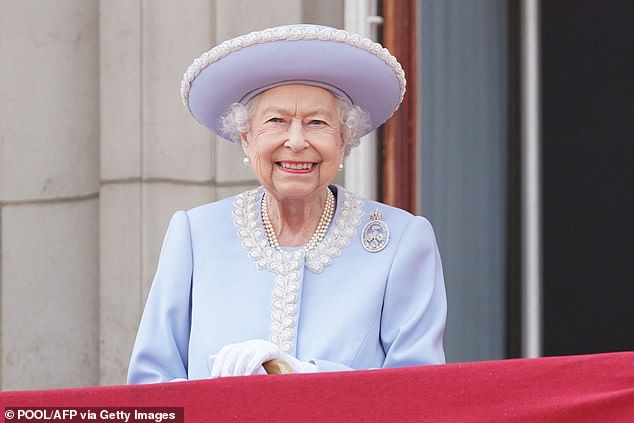 Queen Elizabeth, pictured June 2, died last week at the age of 96. Anya said she despised Britain because of her role in fueling Nigeria’s civil war in the late 1960s, which killed more than a million people. 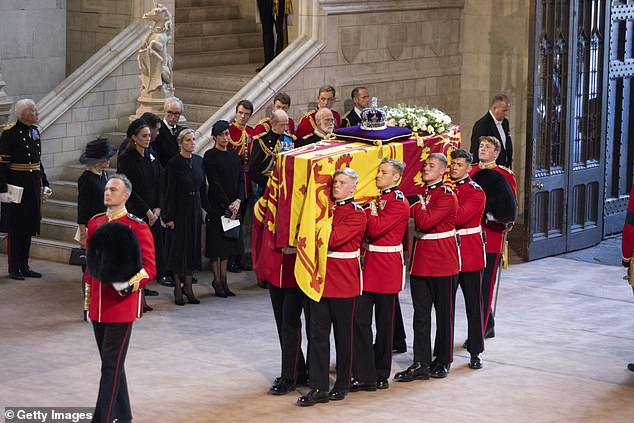 Anya, who said she was an “unapologetic, left-wing” provocative writer accustomed to controversial debates, said her tweet was “not planned, too spontaneous” and “too genuine”.

‘I’ve heard that the chief emperor of a thief, the rapist genocidal empire is finally dying. May his pain be excruciating,’ she wrote in a tweet to her nearly 70,000 followers.

She said she was surprised at how much attention the tweet received, but said it was designed to educate people.

‘I like to teach. I’m basically a teacher,’ she said.

‘And I bring evidence and support for my claims.’

Some Rai writers also celebrated the death of the queen, with one promising to dance at her grave and another describing her 70-year reign as ‘disastrous’.

While millions around the world mourned the death of the 96-year-old monarch, provocateurs in some of the most respected publications in the United States were mocking the wave of mourning.

The derision of his reign was led by New York magazine senior newspaper writer Tirahka Love.

“For 96 years, that colonialist has been sucking up the Earth’s resources,” he wrote in his Thursday evening newspaper.

He continued: ‘You cannot be a real oppressor and expect that the people you have tortured will not rejoice at the news of your death.’ 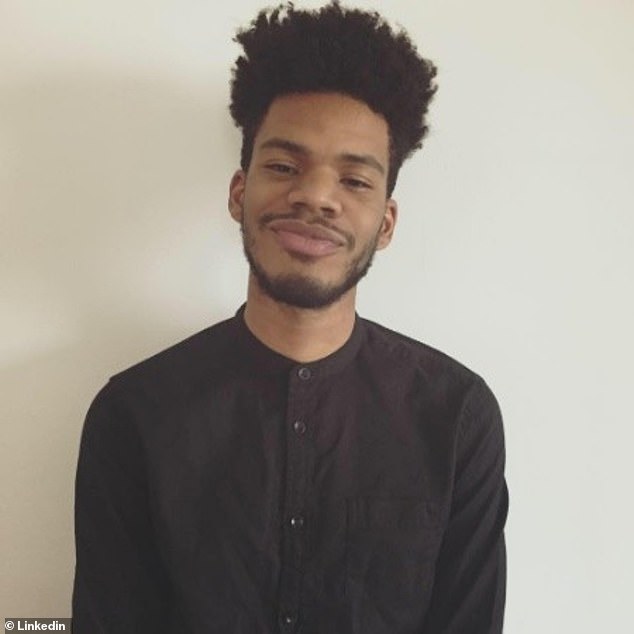 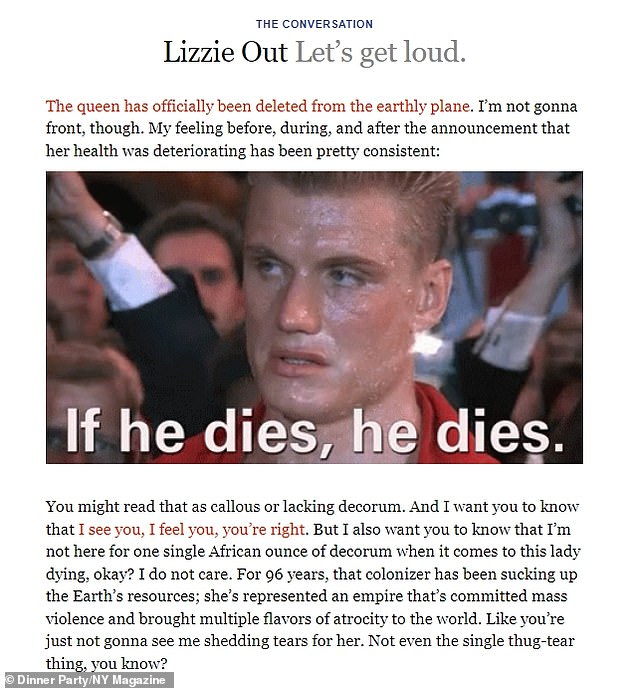 Love, who was appointed in December, was described by the magazine’s editors as ‘creative and restless’ and ‘fun and surprising’, saying she felt nothing but joy at his death.

‘Now should I shut up or, better yet, really lament what a barely-breathing Glad Forceflex garbage bag was? Please, no,’ he wrote.

‘I just want to remind you that in the rest of the world, and I mean the real world, most people today will be celebrating.

‘We all have our ways to grieve, friends; It’s all mine to do an electric slide on a colonizer’s grave.

When someone responded with mock horror, the Texan replied: ‘Lamau whatchu mean???? I’m going to be as respectful and sweet as ever!’

In The New York Times, Maya Jasnoff, professor of history at Harvard University, where she focuses on the history of Britain and the British Empire, said it was wrong to ‘romanticize’ her reign. 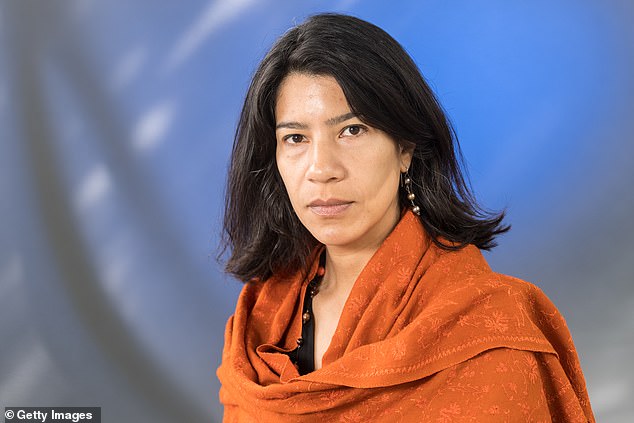 Maya Jasnoff, a Harvard professor specializing in the history of the British Empire, said it was wrong to ‘romanticize’ the Queen’s rule.

“The Queen helped obscure the bloody history of colonialism, the proportions and legacy of which are not yet adequately acknowledged,” she wrote.

“We will probably never know what the queen did or didn’t do about the crimes committed in her name,” he said.

‘Those who ushered in the Second Elizabethan Era hoped that Elizabeth II would maintain British greatness; Instead, it was an era of destruction of the empire.’

Jemele Hill, a writer for The Atlantic magazine, also said on her Twitter account that journalists have a duty to cover the “devastating” effects of Elizabeth’s reign.

‘Journalists are tasked with putting the legacy in full context,’ Hill wrote, so it is entirely appropriate to examine the Queen and her role in the devastating effects of continued colonialism. 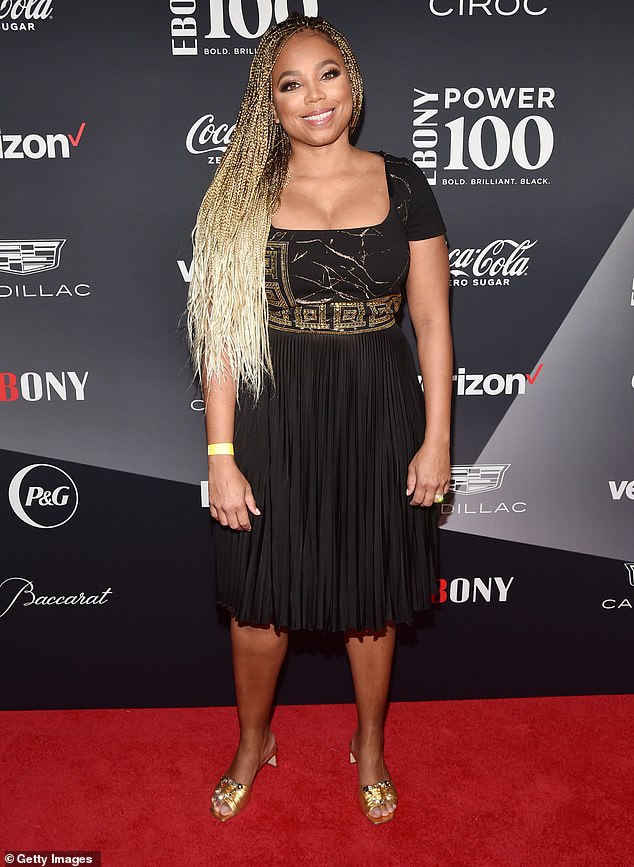 Another journalist, Eugene Scott of The Washington Post, also offered his opinion, asking when would be a good time to talk about colonialism under the Queen.

Imani Gandy, a legal analyst for Riwire News, tweeted a video of a group of men outside Buckingham Palace dancing to another One Bites the Dust song.

‘The Queen has died and the Irish are already on it,’ she wrote.

Tennessee vs. Vanderbilt prediction: Ride with the underdog

Epileptic accountant ‘suffered a seizure’ as he fell in front of Tube train and was killed, inquest hears

‘After a while it eats you up’: Kevin De Bruyne on dealing with the spotlight, life at home and whether he gets paid too...