Imperial State Crown encrusted with 3,000 diamonds that was worn by the Queen after the Coronation is laid upon her coffin as it lies in state at Westminster Hall

The Imperial State Crown adorns Her Majesty the Queen’s coffin as she was sent to lie in state at Westminster Hall.

The late emperor will remain in the hall from Wednesday to Monday morning, the day of his funeral.

The Imperial State Crown is one of the Crown Jewels and represents the sovereignty of the Emperor.

It will remain on the queen’s coffin at the top of the royal standard and next to the lord’s orb and scepter.

The crown was worn by Queen Elizabeth II after her 1953 coronation and was worn once every year by the monarch to the state opening of Parliament.

It was adjusted for Her Majesty’s head and its arches were reduced an inch to give it a more feminine look.

Traditionally worn by the Queen until the State Opening of Parliament, this headpiece has been passed down through generations, originally created for the coronation of King George IV (pictured in 2002) 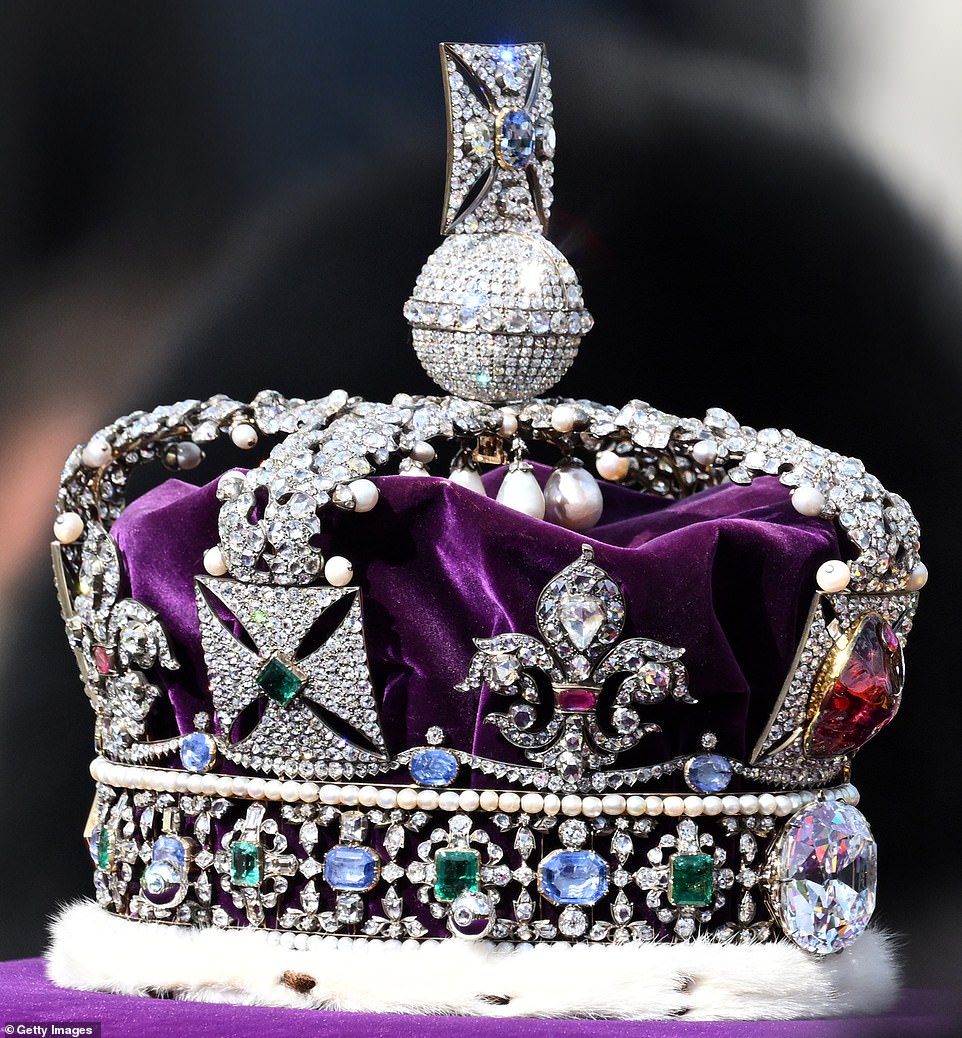 The crown consists of 2,868 silver diamonds as well as 269 pearls, 17 sapphires and 11 emeralds. It is part of the Crown Jewels 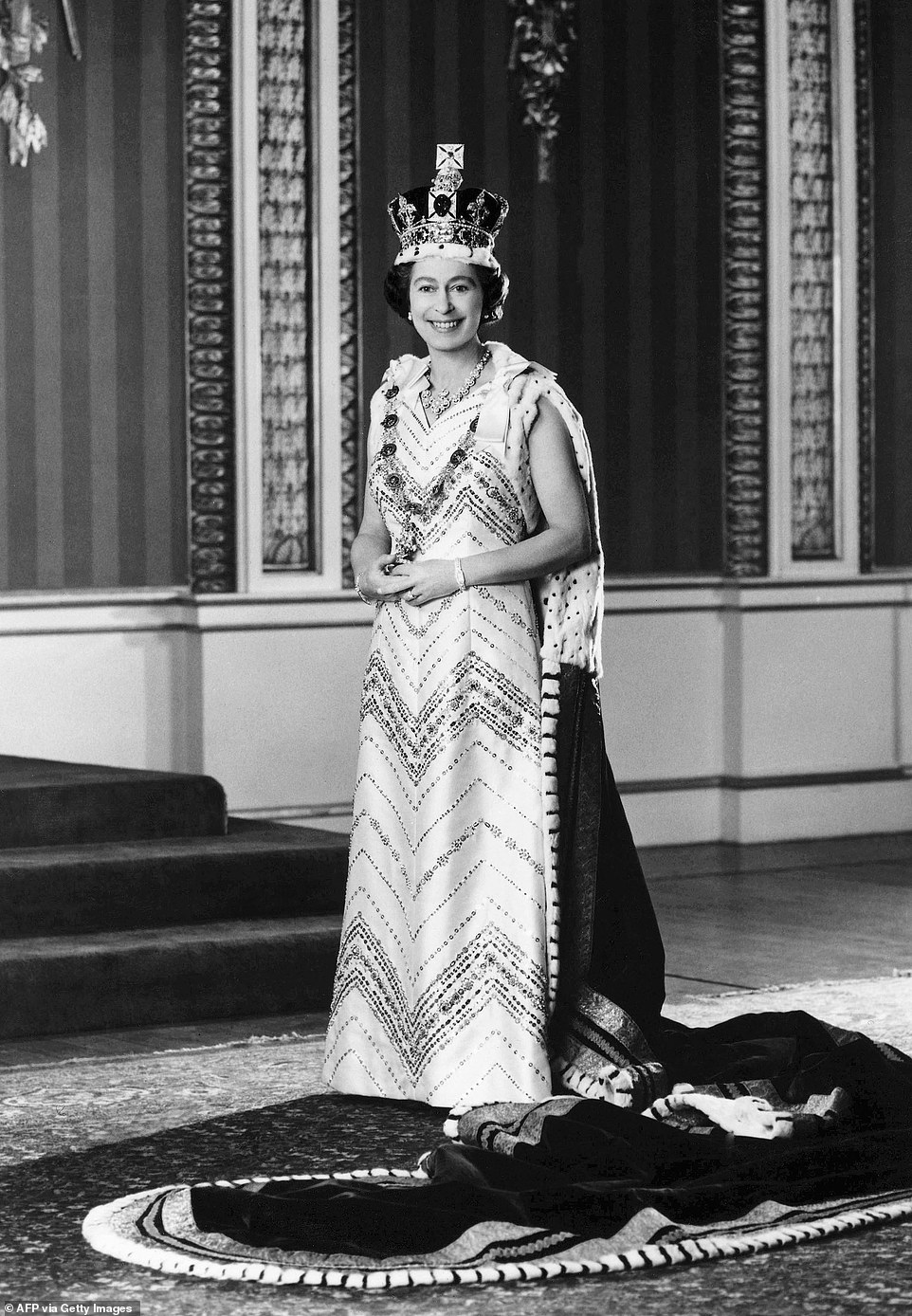 Queen Elizabeth II, in royal royal dress, poses in the throne room of Buckingham Palace for this special jubilee portrait when she delivered the traditional Queen’s speech at the official state opening of Parliament in 1976. She wears the Imperial State Crown and the state robe, also known as parliamentary robe. Around her neck is a jubilee necklace of diamonds and pearls and a chain collar with the Order of the Garter, Britain’s principal order of knighthood. Her gown is of white silk with gold and silver embroidered bands 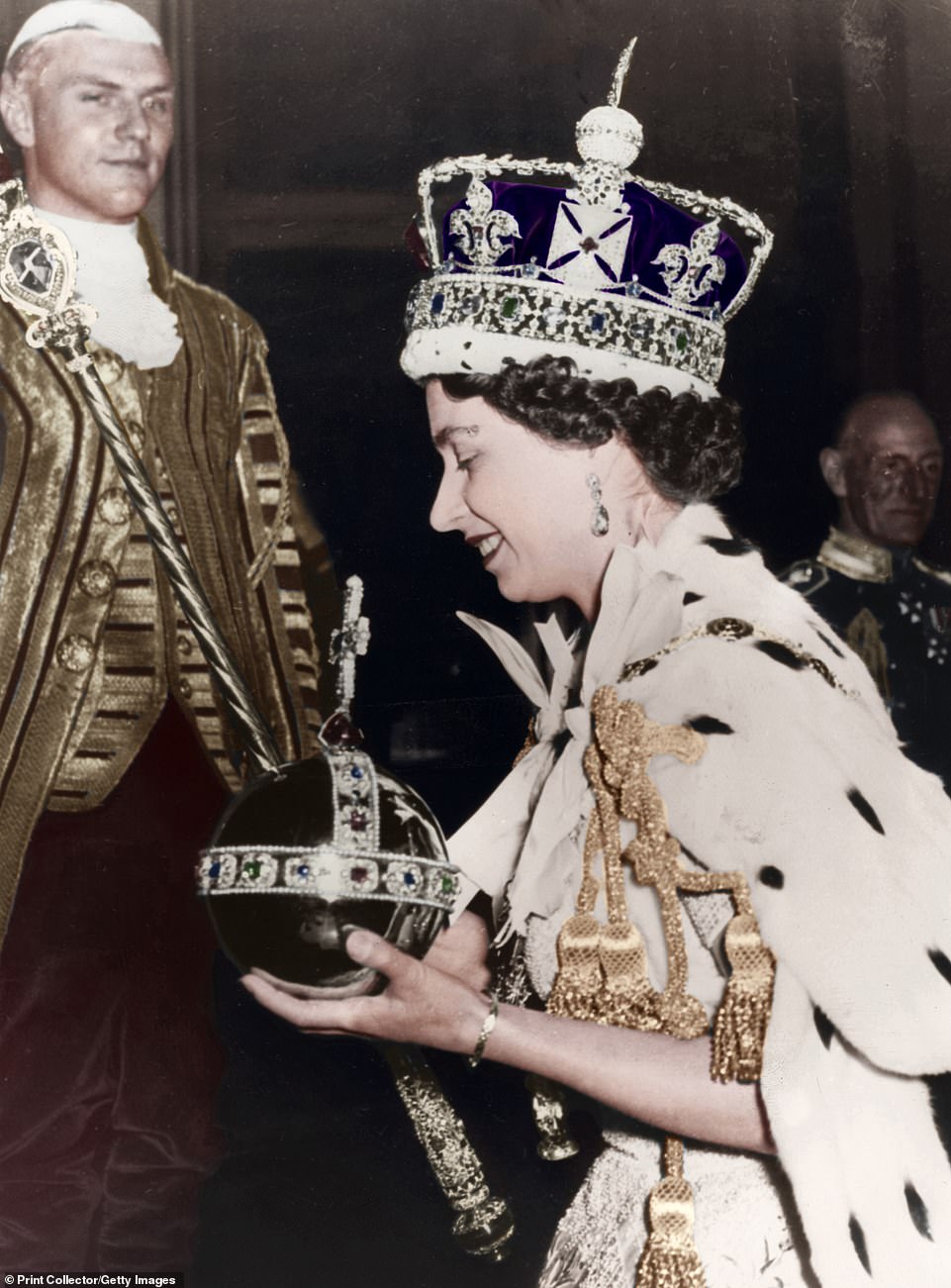 At her coronation, the queen wore a crown gleaming with jewels and held the world’s largest white diamond scepter. But a royal expert has predicted that Her Majesty will be buried with just two jewels. Above: The Queen wears the Imperial State Crown as she returns to Buckingham Palace, holding the orb and scepter after her coronation in 1953 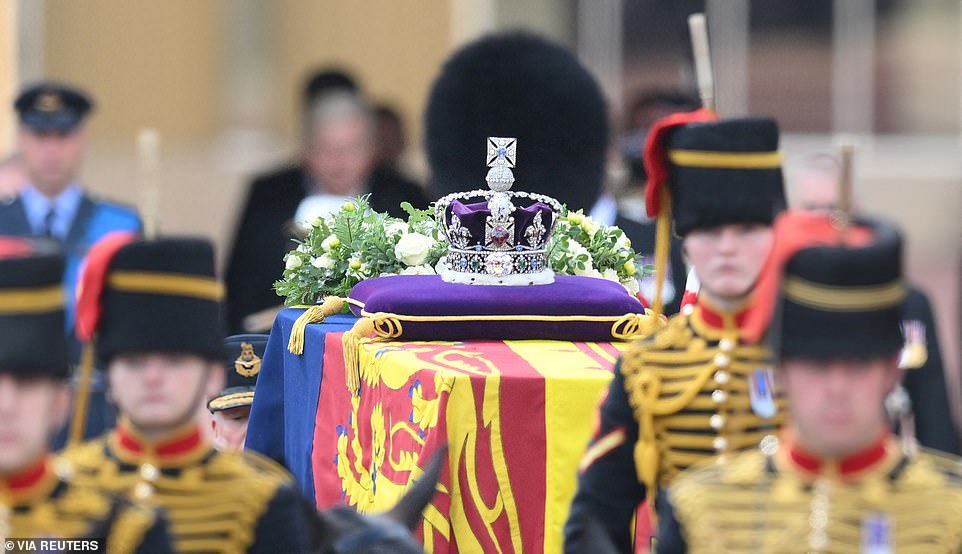 The coffin of Queen Elizabeth II, adorned with the Royal Standard and the Imperial State Crown, is pulled by the gun carriage of the King’s Troop Royal Horse Artillery during a procession from Buckingham Palace to the Palace of Westminster on Wednesday. 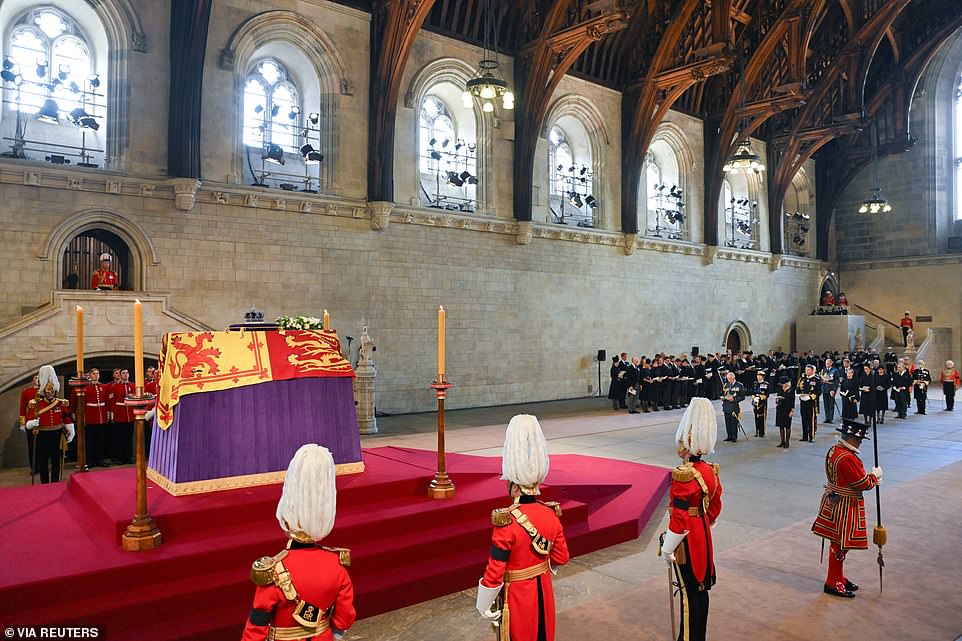 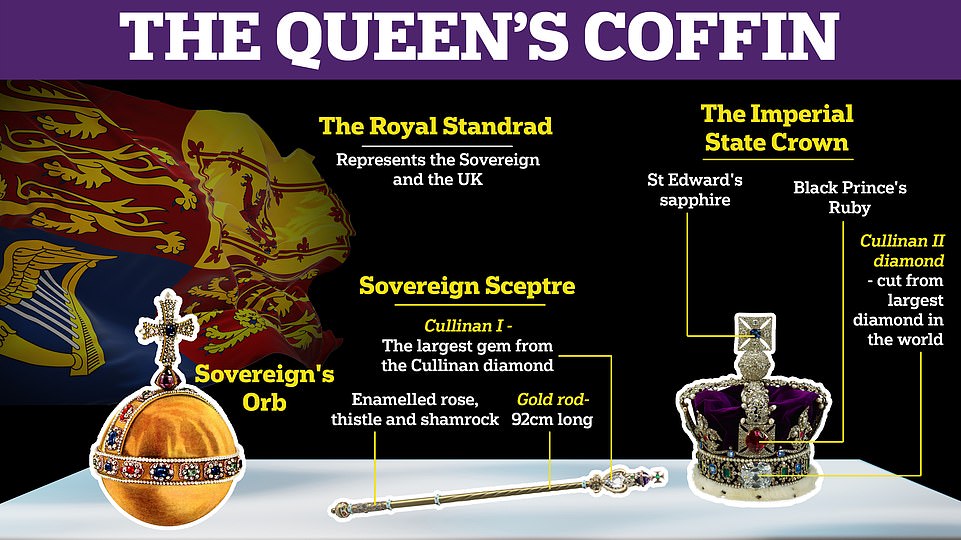 The Queen’s coffin is draped with the Royal Standard, as was the case in Edinburgh. Accompanying the standard would be the Imperial State Crown, which was worn once a year by the Queen at the State Opening of Parliament. There will also be a circumambulation of the Lord and a scepter on the coffin. The diamond on the scepter – Cullinan 1 – was cut from the largest rough diamond ever found. It was discovered in 1905 in a mine in South Africa

Originally created for the coronation of King George IV, the headpiece has been passed down to him through the generations.

The gown, designed by Norman Hartnell, features the symbols of the United Kingdom and Commonwealth in gold and silver thread.

The designs for the crown were based on one designed for Queen Victoria in 1838.

The crown consists of 2,868 silver diamonds, 269 pearls, 17 sapphires and 11 emeralds. The crown weighs two and a half pounds.

It contains the 317-carat Cullinan II diamond, the second largest clear-cut diamond in the world and also known as the Second Star of Africa.

It was found by Frederick GS Wells in 1905 at the Premier Mine, about 20 miles from Pretoria, South Africa. 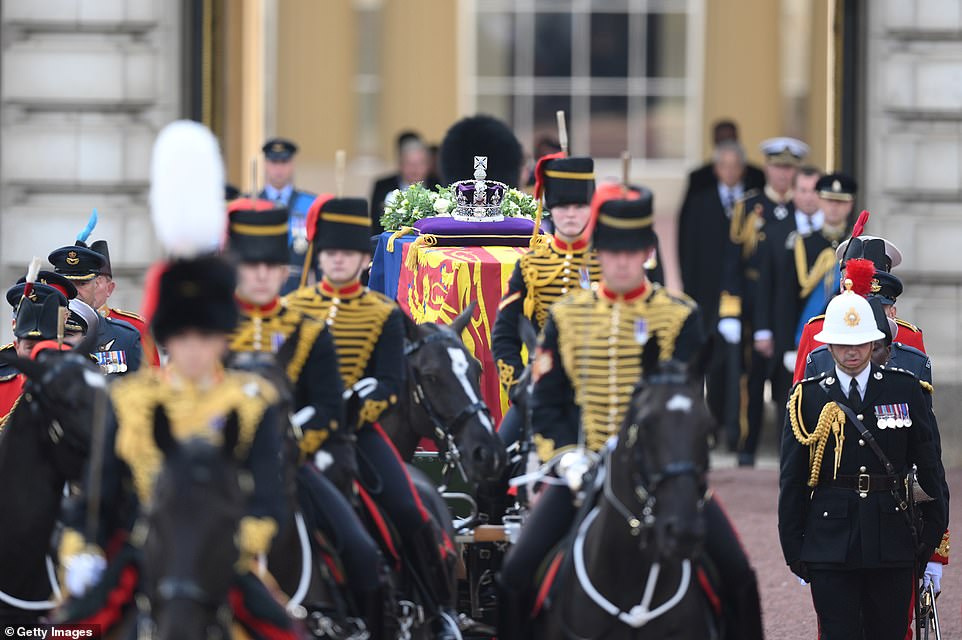 2.22 pm: The gun carriage carrying the coffin of the late Queen Elizabeth II departs Buckingham Palace, moving the coffin to the Palace of Westminster 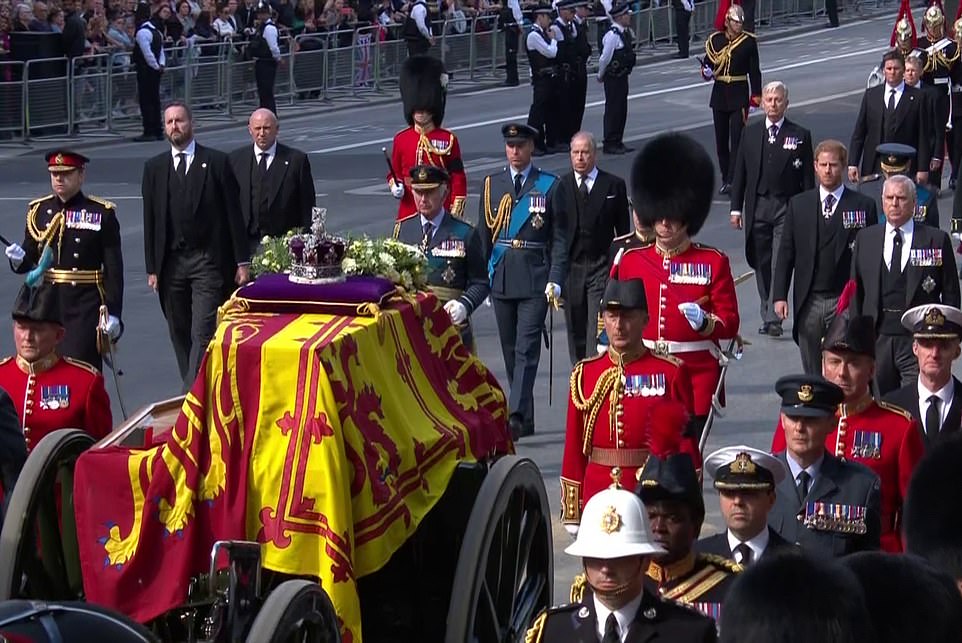 Strictly Come Dancing heart-throb Matt Goss paid £20,000 to fly his beloved bulldog ‘Reggie’ to Britain as he says the pooch is ‘everything to...