July 2022 was one of the three hottest Julys on RECORD – with global temperatures 0.7Â°F above average, satellite data revealsÂ

Last month was one of three warmest Julys on record globally, satellite data shows – while it was the hottest in terms of extreme heat for southwestern Europe.

It broke the all-time record for maximum temperatures in regions including the UK, which recorded its hottest day on July 19, 2022.

On average, July 2022 was the sixth warmest July for Europe on record.

C3S data reveals prolonged summer intensities that began in Portugal and Spain before continuing north and east toward France, the UK, Central Europe and Scandinavia.

The Iberian Peninsula saw an unusually large number of days with temperatures exceeding 95 Â°F (35 Â°C), underscoring the longevity of warm temperatures in the region.

Sweltering: Last month was one of three warmest Julys on record globally, satellite data shows – while for southwestern Europe it was the hottest ever in terms of extreme heat. 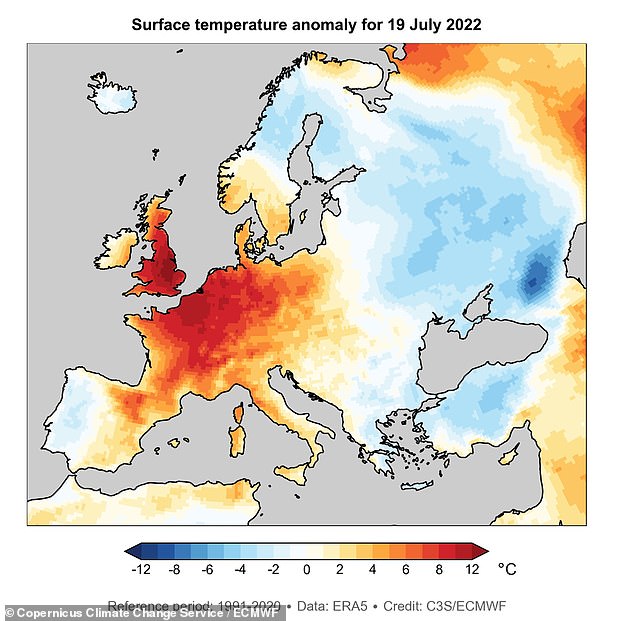 It broke the all-time record for maximum temperatures in regions including the UK, which recorded its hottest ever day on July 19, 2022.

The extreme heat was caused by a plume of warm air from North Africa and the Sahara and an ‘Azores High’ subtropical pressure system crawling farther north than usual – which experts said was a result of climate change.

‘Heatwaves pose serious risks to human health, and they can increase the intensity and longevity of many other catastrophic climate events, including wildfires and droughts, which affect both society and natural ecosystems.

‘Additionally, the dry conditions of the previous months coupled with high temperatures and low rainfall rates observed in many areas during July could adversely affect agricultural production and other industries such as river transport and energy generation.’

All of the reported findings are based on computer-generated analyzes using billions of measurements from satellites, ships, aircraft and weather stations around the world.

July 2022 was drier than average for much of Europe, breaking local low rainfall records in the west and drought in many places in the southwest and southeast of the continent.

Experts said these conditions facilitated the spread and intensity of wildfires.

It was also drier than average over large areas of North America, South America, Central Asia and Australia.

Above-average wet conditions were particularly notable in a large wet band extending from eastern Africa to north-west India across eastern Russia, northern China, and across Asia.

Widespread areas of below-average sea ice concentration were observed in the Southern Ocean from the Amundsen and Bellingshausen Seas to the northern Weddell Sea, as well as over most of the Indian Ocean.

Arctic sea ice extent was 4 percent below average, ranking the 12th lowest for July in satellite records, well above the low July values â€‹â€‹observed in 2019-2021.

‘We are on fast track for climate disaster’: UN damning report warns greenhouse gas emissions must peak by 2025 to limit global warming to 2.7 degrees Fahrenheit.

A United Nations report warns that in order to hit the ambitious target of limiting global warming to 2.7 degrees Fahrenheit (1.5 degrees Celsius), global greenhouse gas emissions need to peak before 2025.

The UN Intergovernmental Panel on Climate Change (IPCC) report claims there is ‘a brief and rapidly closing window of opportunity’ to limit warming by 2100.

The emission of carbon dioxide (CO2) is necessary …

US diplomat who fled UK after crash that killed Harry Dunn is expected to appear via videolink in British court today: Anne Sacoolas will...

‘I almost don’t want to big him up too much!’: Jordan Henderson is wary of piling the pressure on Jude Bellingham… but backs the...

Steamship that sent an iceberg warning to the TITANIC before it crashed and sank in 1912 is discovered broken in two at the bottom...

Now brace for return of Asian hornets! Warning issued after invasive insects with nasty sting are spotted in the UK for first time in...

Apple CUTS production of the new iPhone 14 by 6 million units in the second half of 2022: Price hikes and rising inflation forces...

‘PERFECT archaeology machine’: Researchers use iPad Pro to ‘revolutionize’ how they preserve the ancient history of Pompeii after years of taking notes on paper...

A yoga class that is out of this world: ESA astronaut performs the Jedi warrior and crescent moon poses while in microgravity aboard the...

‘Truly a spectacle!’ Eerie bloom of light over the Atlantic Ocean left by a SpaceX rocket launch leaves US Air Force crew ‘dumbfounded’