C&C Group has acknowledged that demand for hospitality destinations has slowed in recent months amid rising cost pressures on consumer spending.

The Dublin-based beverage maker, which produces Magners and Bullmers cider brands, said trading was ‘strong’ before seeing a slowdown in on-trade momentum in the second quarter at the start of the current fiscal.

However, it still forecasts to report net revenue of around €900 million for the six months to the end of August, a 35 percent annual increase and a slight increase in pre-pandemic volumes.

Cheers: C&C Group, which produces Magners and Bullmers cider brands, said business was ‘strong’ at the start of the current fiscal.

For the same period, the firm is set to report operating profits that will more than triple from €16million last year and between €52million and €55million this time.

It also anticipates the sale of its stake in pub chain Admiral Tavern to reach its net debt to adjusted earnings ratio target of approximately 1.5 times, due to the £55 million sale and healthy cash generation.

C&C Group’s sales have improved strongly as consumers return to pubs, bars and restaurants in the British Isles following the easing of COVID-related restrictions.

On-trade net revenue in Great Britain increased to €1.21 billion last year, partly due to increased volumes among its branded products, such as Magners and Tennants Lager.

The London-listed company also attributed its performance to successfully managing supply chain issues, including a shortage of drivers and warehouse workers, and high carbon dioxide prices. 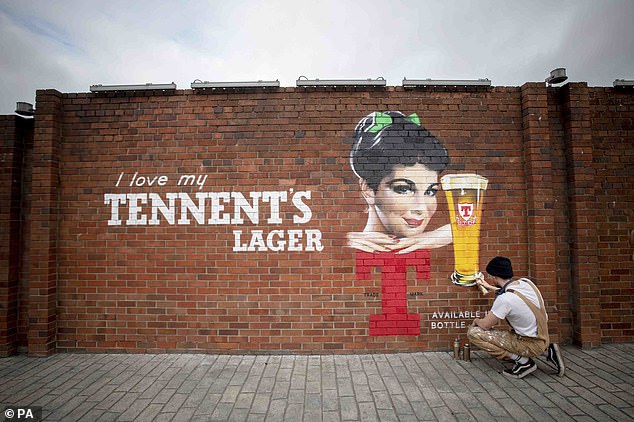 But C&C chief executive David Ford warned that the firm was ‘operating in an evolving and challenging inflationary cost environment’ and would have to raise prices in response to rising costs.

“Despite the reopening of the current positive sentiment in the hospitality sector, we remain conscious of consumer pressure and its potential impact on future demand,” he added.

Shares of C&C Group Trading closed at 159.8p, down 8.1 percent on Wednesday, making it the second biggest fall on the FTSE 350 index after Ocado. Since the start of the current year, their value has declined by a quarter.

Today’s trading update comes a week after new Prime Minister Liz Truss announced that households would have their annual energy bills frozen at £2,500 for two years, while businesses would limit their prices for six months.

Leaders in the hospitality sector welcomed the latter measure, although they said more assistance was necessary to prevent more places from closing.

Emma McClarkin, Chief Executive of the British Beer & Pub Association, said: “We need clarity and reassurance over the long term so that our brewers and pubs can effectively plan and thrive in the heart of their communities long into the future. May be.”

‘The cost of doing business is still a very real threat to many people, but we are encouraged by the direction this government is going. Now we need to hear more on keeping trade rates, VAT and beer charges low.

Suffering from foot or leg pain? More than 30,000 Amazon shoppers say this Shiatsu electric foot massager is ‘the best cure’ for niggles and...

‘I knew it would end in disaster for them’: Jilted girlfriend who was dumped by the father of her two children for Ukrainian refugee...

‘Big Sam had the job before him!!’: Jamie Carragher leaps to Gareth Southgate’s defence after England’s 3-3 draw with Germany in expletive-laden Twitter message…...

Belated pledge by Bailey: Bank of England boss should tackle the issues at hand… and not worry about the history books, says ALEX BRUMMER