THIS is the shocking moment a family dog ​​was KICKED by a postman leaving a daughter in floods of tears.

The horror incident was caught by a doorbell camera as the Royal Mail worker delivered a parcel.

In the footage from Greater Manchester, the postman can be heard muttering a few words before passing the parcel to the teenage girl.

The family’s little dog can then be seen running towards the open door barking.

But then in astonishing moment the man appears to kick the dog, sending it flying across the driveway and whimpering onto the lawn.

It gets to its feet and stays clear of the postman who claims the dog bit him on the ankle triggering a reflex, The Manchester Evening News reported. 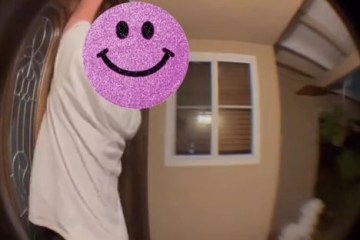 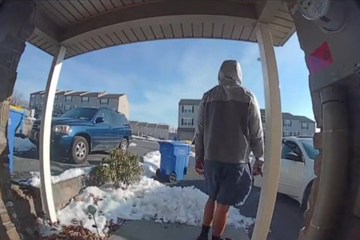 The man then leaves but the mother of the devastated daughter said she was inconsolable following the horrific incident.

The mum now claims the dog wets itself every time the doorbell rings and has since made a formal complaint to Royal Mail.

The mother said: “She was crying her eyes out and she’s not an emotional kid.

“My dog ​​is terrified of going to the door and when the doorbell goes, he wets himself and is visibly shaking.”

In a letter seen by the Manchester Evening News, Royal Mail apologised for the upset caused but pointed out that 33 of their delivery workers are injured by dogs every week.

They said such injuries range from “small nips, through to life-changing injuries on friends at work”.

The letter went on to say: “We wish to again express our regret and offer our apologies once more for the upset, especially to your young daughter.

“Royal Mail staff are family people, with cats, dogs and other pets and we fully appreciate what a huge part of a home they are.”

The company – which has been delivering post since 1516 – said they practice an absolute AVOID policy with pets.

This means mail is returned to the office for a safe attempt delivery if a pet is defending their space.

A Royal Mail spokesperson said in a statement: “Royal Mail treats all dog attacks on our postmen and postwomen very seriously.

“Our first priority as an employer is to ensure the welfare and safety of our people who provide a valuable service to our customers.

“The vast majority of dog owners are very responsible and keep their pets under control. However, last year, there were 1,690 dog attacks on postmen and women in the UK – some resulting in life-changing injuries.