Watching your child take their first steps is meant to be one of the most exciting milestones as a new parent.

But for Natasha and Alex Finney, their elation soon turned to horror after spotting what turned out to be cancer in their 11-month-old.

As AJ walked unaided for the first time, he noticed he had an unusual cloudiness in his right eye.

Alarmed, they took him to see doctors, who hastened through tests and diagnosed him with retinoblastoma.

Due to the size of the infant’s cancer, medics had to remove his eye straight away in a three-hour operation — one day after his first birthday.

AJ, from Bolton, now has one artificial eye following the procedure in December.

Mrs Finney told MailOnline her son is doing ‘amazingly well’ considering everything he has been through.

The teacher, 29, said her son is a ‘happy little boy who is now up on his feet, walking around everywhere and developing a cheeky, contagious personality’.

Watching your child take their first steps is meant to be one of the most exciting milestones as a new parent. But for Natasha and Alex Finney, their elation soon turned to horror after spotting what turned out to be cancer in their 11-month-old. As AJ walked unaided for the first time (pictured), he noticed he had an unusual cloudiness in his right eye 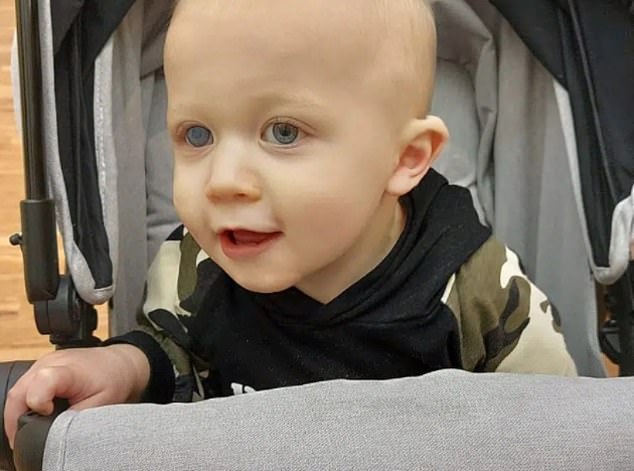 Doctors confirmed AJ had retinoblastoma, a tumor in the retina that can be seen through the pupil. Pictured: AJ on November 25, the day he was first taken to his GP 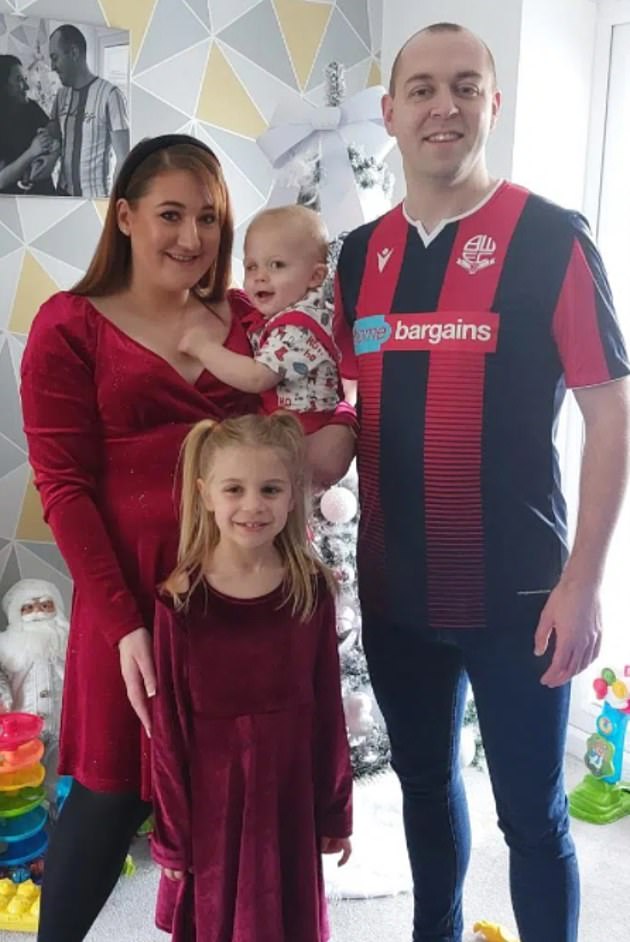 Mrs Finney said AJ’s seven-year-old sister, Alice (pictured with AJ and her parents), has been ‘amazing’ at adapting to having a partially-sighted sibling

Retinoblastoma is a rare type of eye cancer that can affect young children, usually under the age of 5.

Its symptoms include an unusual white reflection in the pupil, a squint, a red or inflamed eye and poor vision.

Retinoblastoma happens when retina eye cells — which are supposed to grow very quickly and then stop growing during a baby’s early development — continue to grow and form a cancer.

Depending on the size of the tumour. If it is small, laser and freezing treatments that aim to destroy the tumor will be carried out.

If it is larger, youngsters may undergo surgery, chemotherapy and radiotherapy.

Some children may suffer sight loss or need to have their eye removed.

Between 40 and 50 cases of retinoblastoma are diagnosed in the UK every year.

Around four in 10 cases are diagnosed in the first year of life and incidence rates drop to a very low rate after five years of age.

Around two-thirds of retinoblastomas are diagnosed in one eye only.

More than nine in 10 cases are detected early and cured before the cancer spreads outside the eyeball.

Speaking of the day they were first alerted to AJ’s retinoblastoma, Mrs Finney said: ‘While changing AJ’s nappy, he cried a lot.

‘When he got up, taking his first steps in the process, we were over the moon.

‘But then we noticed a cloudiness in his eye and decided to get him into the doctors that day.’

AJ was referred to a specialist eye hospital by his doctor, where he had vision tests, pressure readings and ultrasound scans.

The consultant thought it could be retinoblastoma, a tumor in the retina that can be seen through the pupil.

Mrs Finney and her partner, a commercial agent, were told not to Google the cancer but they decided they needed to know more about their son’s condition.

She said: ‘The standout word was “cancer”. Our hearts sunk lower than we knew was possible, we were devastated.’

Typical retinoblastoma symptoms include a squint, a change in iris colour, a red or inflamed eye and poor vision.

They can also include an unusual white reflection in the pupil, sometimes referred to as a cat’s eye.

When the tumor forms, light reflects off the cancer’s surface, causing the child’s dilated pupil to appear white in flash photos or dim light.

If the tumor is small, laser and freezing treatments will be carried out to destroy it. If it is larger, youngsters may undergo surgery, chemotherapy and radiotherapy.

Some children may suffer sight loss or need to have their eye removed.

Mrs Finney said: ‘We weren’t aware of retinoblastoma before AJ was diagnosed, so we wouldn’t have known any typical signs or symptoms of it.

‘Although AJ had a visible squint quite early on, we weren’t concerned as Alex and his mum also have a slight squint, so we assumed it was hereditary.

‘Since AJ’s diagnosis, we have discovered that a squint is the second most common sign of retinoblastoma’.

The week after his tests in late November, the family traveled to the specialist retinoblastoma ward at Birmingham Women’s and Children’s Hospital to have AJ’s eyes examined under anaesthetic, where the retinoblastoma diagnosis was confirmed.

Mrs Finney said: ‘We weren’t really given any other option other than removal of his right eye, purely due to the size of AJ’s tumour.

‘Alex and I were devastated, and it took us a while to digest what we were being told.’

AJ had his right eye removed the day after his first birthday in a three-hour procedure.

His mother said it ‘felt like the longest three hours’ of their lives but it was a ‘huge relief’ when surgeons said the operation had been a success.

Medics were able to remove all of his cancer, meaning he does not require regular medication or treatment.

When Dawn Procter started experiencing heart palpitations four years ago, her GP immediately put them down to anxiety.'I was 42, bringing up two teenagers...
Read more
Health

Four people in England have been diagnosed with the rare viral infection monkeypox.Three of the cases have been detected in London and one in...
Read more
Health

UK monkeypox alert as health chiefs detect another FOUR cases of killer virus with NO links to Africa – as gay and bisexual men...

New patients are gay or bisexual men from London with no travel links to Africa Two knew each other but not linked to early...
Read more
Health