European football’s governing body has banned British football clubs from playing the national anthem before matches in honor of the Queen.

Manchester City, Chelsea and Rangers all asked permission to play God Save the King ahead of kick-off in their home Champions League clash tonight.

But UEFA denied it, claiming it would have to ensure a “pressurised atmosphere” without any “celebratory activities” before the games. 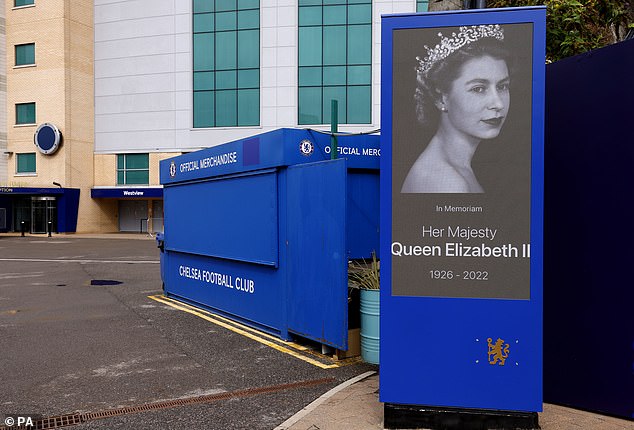 It is understood that Rangers intend to defy the ban and will play the anthem before their match against Napoli tonight after a period of silence. If English clubs do the same, the result could include a fine.

Fans can decide to sing God Save the King despite the ban. Chelsea is closely associated with the Chelsea Pensioners located at the Royal Hospital Chelsea in west London, which was founded by King Charles II in 1682.

Rangers have long ties to the royal family. Former manager and Sportsmail columnist Graeme Souness wrote this week about how he put up a portrait of the Queen in the dressing room of the house shortly after taking over at the club.

Manchester City are understood to be eager to give their supporters an opportunity to pay their respects to the Queen by singing the national anthem.

Tory MP Greg Hands from Chelsea and Fulham said last night: ‘This behavior by UEFA is completely unfair. Teams and their supporters will welcome the opportunity to celebrate our new Emperor. In Britain, the king is above politics.

Former culture secretary and fellow Chelsea fan David Mailer said: ‘If UEFA can get it wrong, they will. How can there be a good reason for banning the national anthem?’

He said the official ban would not stop fans from singing the national anthem.

Former sports minister Tracy Crouch said: ‘The president of UEFA expressed his deepest condolences on the death of Queen last week, calling her one of the most respected figures in the world. This week they are banning the opportunity for fans to play an anthem in recognition of his passing.

And just hours after Queen’s death was confirmed on Thursday last week, West Ham fans sang it during their Conference League victory over the Romanian FCSB.

UEFA confirmed that it has received several requests from clubs to play God Save the King.

It has also banned the waving of player mascots and banners in the center circle. But one minute silence and black band can be done on request.

A UEFA spokesman said: ‘No national anthem will be played. , , By virtue of maintaining a consistent pre-match ceremony with a relaxed atmosphere…’

UEFA has come under criticism in the past for its pathetic record of punishing racist behavior while issuing heavy sanctions for more trivial matters.

For example, in 2012, Porto was fined £16,700 for Mario Balotelli’s racist abuse of his fans during a clash with Manchester City – but for being late on the pitch for the second half of the game against Sporting. City was fined £25,000 for this. Lisbon.

Romelu Lukaku PUNCHES the dugout and storms down the tunnel in tears after he missed three sitters as Belgium crashed out of the World...

Two Just Stop Oil activists may have ‘increased’ the value of a Van Gogh painting after gluing hands to frame in art gallery protest,...