Patients with asbestos-triggered cancers could live longer and in less pain due to a breakthrough therapy that slows the growth of tumors. At present just seven per cent of those with the disease, called mesothelioma, survive longer than five years from diagnosis.

But results from a new trial show a new drug, abemaciclib, can extend life in those with the most aggressive form of the disease for months or even years.

Prof Dean Fennell, who led the trial at Leicester University, said: ‘Mesothelioma is a nasty form of cancer and there hasn’t been an effective treatment. Many patients are left without any options.

Malcolm McLaren, pictured with his friend Viviane Westwood believes he was exposed to asbestos while renovating his Kings Road shop Sex 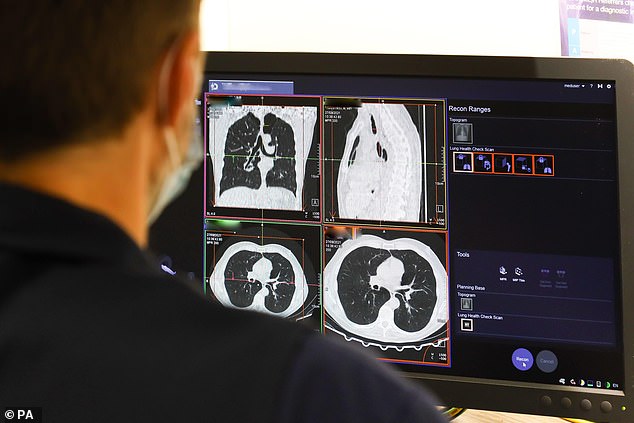 Results from a new trial show a new drug, abemaciclib, can extend life in those with the most aggressive form of the disease for months or even years

‘But this new treatment has shown promise in halting the progress of and, in some cases, reversing the growth of the cancer for patients who aren’t responding to chemotherapy or immunotherapy drugs. This can add precious months to their lives and allow them to live without so much pain.’

More than 2,600 people a year in the UK are diagnosed with mesothelioma. Most are 60 to 80, and men are affected more than women because it is usually caused by asbestos, insulation once used in flooring and roofing. Men who worked in the building trade were most likely to be exposed.

If intact, asbestos insulation causes no harm. But if it’s broken up, microscopic fibers are released into the air. These get into the lungs where they cause scarring which develops into cancer. Tumors are found in the membrane surrounding the lungs – the pleura – the abdomen and testicles – though it’s not known how it spreads.

Asbestos was withdrawn from use in the UK in 1999 but cases of mesothelioma have increased by 61 per cent since the early 1990s. It can take 30 to 40 years to develop, meaning men who worked with asbestos in the 1980s or early 1990s are now most at risk.

Because asbestos was so widely used in the UK we have the world’s worst rate of mesothelioma, with 2,500 people a year being diagnosed.

He believed he was exposed to asbestos while renovating Sex, the infamous shop on Kings Road, London, he ran with his one-time partner, designer Vivienne Westwood.

Once chemotherapy or other treatments stop working, Prof Fennell says patients are given just months to live. But experts believe abemaciclib could offer them fresh hope. It works by enabling the body to produce a cancer-fighting protein and, while it cannot provide a cure, it can stop the cancer spreading, buying patients more time.

The patients on the trial were given two tablets a day for 24 weeks. After six months of treatment, 23 per cent of them had not experienced additional cancerous growth – despite the fact many would have been expected to have died at this point. Patients suffered few serious side effects and were also less dependent on pain medication as a result of the treatment.

David Squires, 65, from Huntingdon in Cambridgeshire, was one of the first mesothelioma patients in the UK to benefit. As a teenager, he worked with asbestos, without realising he was inhaling tiny toxic fibers that years later would attack his lungs.

‘I was just 17 when I served as an apprentice for a local company that installed fire doors,’ says David, a father-of-three. ‘My job was cutting and fitting the asbestos to the backs of doors for hotels.’

A long career in building followed, during which David suspects he came into contact with the dangerous substance. But it was only decades later – in his early 60s – that the exposure took its toll.

‘I was playing golf in Spain when I felt out of breath,’ he says.

When the breathlessness got worse, David saw his GP, who referred him for a chest X-ray. It showed he had fluid on the lungs that required urgent draining. But there was worse to come. In November 2019 a biopsy confirmed David had mesothelioma, with three tumors on his lungs.

He was entered into a clinical trial at Addenbrooke’s Hospital for two cancer-fighting drugs – bevacizumab and atezolizumab – and for a while the cancer was kept at bay.

But the tumor grew again and David was switched to abemaciclib. ‘I’ve been on that for over a year and will be for another eight months,’ he says. ‘It’s keeping my cancer under control and I haven’t suffered any reaction to the drug.’ Now he’s optimistic it will give him extra time to do the things he loves – spending time with family and playing golf. ‘I know others with mesothelioma who lasted less than six months after being diagnosed,’ says David. ‘I’m playing golf most days and my handicap’s lower than before I became ill – I feel great.’

UK monkeypox alert as health chiefs detect another FOUR cases of killer virus with NO links to Africa – as gay and bisexual men...

New patients are gay or bisexual men from London with no travel links to Africa Two knew each other but not linked to early...
Read more
Health

Fitness trainer Chontel Duncan, 32, had five babies in less than six years After giving birth to her youngest, she managed to get in...
Read more
Facebook
Instagram
Linkedin
Mail
Twitter
GranthshalaNews