The culture wars seem to have erupted in the world of needlework.

Readers of a popular sewing magazine are furious after pronouncing contributors.

The wake makeover in Simple Stitch – which has a readership of around 25,000 – was labeled ‘nonsense’, ‘mindless’ and ‘stupid’.

In the latest issue, stitcher Priya Broom shows readers how to make a 1950s-inspired shirt dress with her name and pronoun at the top of the article.

She declares: ‘It’s great that Simply Stitch magazine has started using pronouns. It’s a big part of being an LGBTQ+ ally and helping build a more inclusive society.’ But readers of Â£9.99 magazine aren’t so sure.

Readers of a popular sewing magazine are furious after pronouncing contributors. The wake makeover in Simple Stitch – which has a readership of around 25,000 – was labeled ‘nonsense’, ‘mindless’ and ‘stupid’.

On an online discussion site, one said she was irritated by the addition of pronouns to each article, adding: ‘I’m so upset about all of this. Some people don’t have their pronouns displayed, so hopefully they’re the sane ones who refuse to participate in this nonsense. They are all ‘he/her’ anyway. Others agreed.

One said, ‘Many people add pronouns without thinking because they think it’s just a done thing. ‘They don’t know how stupid they look.’

Two other female contributors are mentioned alongside their illustrations in the same issue of Simply Stitch. Simply Stitch is published by our media. It did not respond to requests for comment.

Simply Stitch describes itself as ‘a practical brand for the stitcher or makers looking to start sewing.

A blurb continued: ‘Its fresh attitude and ideas, beautiful photography and inspiring projects will get you behind the sewing machine from the very beginning!’

The magazine distributes sewing patterns from toys to clothes, and helps readers create home items such as cushions. 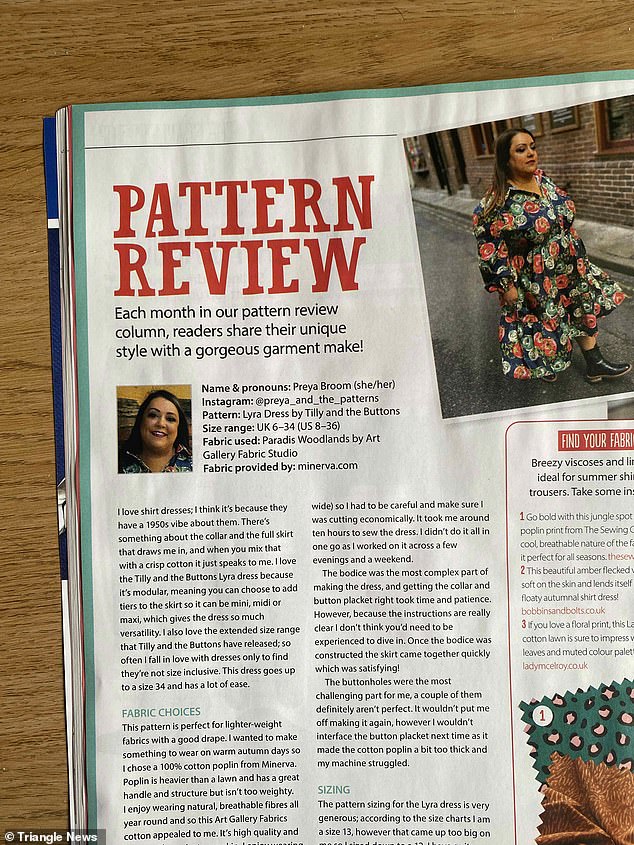 In the latest issue, stitcher Priya Broom shows readers how to make a 1950s-inspired shirt dress with her name and pronoun at the top of the article.

It adds, ‘Customizing your own clothes and home accessories, and includes touches of embroidery and appliquÃ©, along with fun features and profiles of celebrity stitchers and bloggers.

Priya opened up about her joining the magazine on Instagram, where she flaunted her pictures in a floral-print dress she made.

He said: ‘It’s killing me to keep it to myself. I’m in Simply Sewing Magazine this month!

‘I wrote a pattern review for her @tillybuttons Lyra dress. I made this from @artgalleryfabrics cotton poplin. This is the perfect autumn dress and I can’t wait to layer it.

‘When I started documenting my Make Ons more than a year ago, I never thought I’d be asked to do something like this.

‘Before I put up my first post, I was afraid to put myself out there. I’m glad I was brave, because it’s great to see myself in print.’

The pronouns featured in this month’s issue are Kate Underdown and Rachel Walker, who founded the sewing pattern collection The Fold Line in 2015.

Both of them are described with their paintings as him.

Suffering from foot or leg pain? More than 30,000 Amazon shoppers say this Shiatsu electric foot massager is ‘the best cure’ for niggles and...

‘I knew it would end in disaster for them’: Jilted girlfriend who was dumped by the father of her two children for Ukrainian refugee...

Average price for a Bentley is now Â£189,000 as profits soar

SNP publishes argument it submitted in court battle over Indyref2