Sam is now second favorite to win but Richard, who is often compared to fictional radio host Alan Partridge because of his on-air gaffes, scoffed when he heard his uplifting pop song Space Man on GMB today and said: “Nil points.”

Infuriated Eurovision fans raced to Twitter after hearing the remark, with one ranting: “GMB Richard Madeley is such a fan of Eurovision that he thinks the UK will get 0 points.

A second person moaned: “Richard Madeley trotting out the usual ‘EUROPE HATES US’ whilst ignoring the fact that we haven’t even liked most of our own songs in the last decade.” 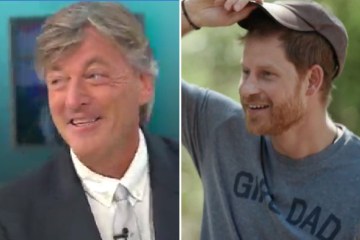 ‘NOT GONNA WIN A BAFTA!’ 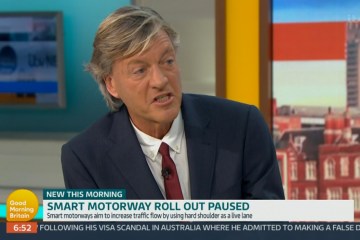 Another tweeted Richard was being “cruel,” adding: “Lasted about 15 seconds. Turned onto hear Richard Madeley saying nil points for our Eurovision entrant.”

Sam has said he is focusing on not being “overwhelmed by the nerves” in the “hectic” lead-up to the grand final of the Eurovision Song Contest.

He co-wrote the track with Grammy-winning songwriter Amy Wadge, who has previously worked with Ed Sheeran and Max Wolfgang.

Speaking ahead of the final, Ryder said: “I’m excited, I’m trying to be focused about it and just getting nice and practiced singing-wise and getting in the right headspace for it.

“It’s really hectic in the lead-up, so I think it’s important just to try and find that focus and balance, and just remember that it’s all about the singing, three minutes of singing.”

The singer-songwriter also revealed he has been getting advice from previous UK entrants of the competition ahead of the final.

“They gave me some tips and pointers and the main thing that keeps coming back is to just enjoy every moment of it, because it’s such a wonderful circus being a part of Eurovision and it’s unlike anything else in the world that you can do.”

“So I’m trying my best, like I said at the beginning, to stay focused and present and not getting too overwhelmed by the nerves. So that I can breathe in every moment,” Ryder added.

The 2021 competition was held in Rotterdam, Netherlands, after the 2020 show was canceled due to the pandemic.

Graham Norton, who returns for his 13th Eurovision Song Contest commenting live on BBC One, said: “I’ve always loved Eurovision but somehow over the last few years it has become even more special.

To play the famous “Lincoln Lawyer” Mickey Haller, a character who hails from the Michael Connelly novels and practices law from the backseat of...
Read more
Entertainment & Arts

TV funnyman Alan Carr reunited with his ex Paul Drayton at a Eurovision party. Alan and Paul announced their split in January but enjoyed each...
Read more
Entertainment & Arts

Katie Price fans all say the same thing as she gives away free £30,000 Audi

KATIE Price fans have been left confused after she announced she was giving away a free car on her social media. Her following were...
Read more
Entertainment & Arts

Will Amber Heard go to jail?

Johnny Depp is suing ex-wife Amber Heard over an op-ed she wrote claiming she was the victim of domestic abuse NEWYou can...
Read more
Entertainment & Arts

Naomi Judd memorial performances: ‘The show must go on’ for Wynonna

The world gave more than a little love to Naomi Judd on Sunday during the star-studded celebration of her life.Her daughters, Ashley and Wynonna...
Read more
Entertainment & Arts

RICHARD Madeley today refused to rule out a return to I'm A Celebrity for its all-star series. The Good Morning Britain star's stint in Gwrych...
Read more
Entertainment & Arts

The New York City hookup scene has exploded with a bang — or, should we say, several.New Yorkers across the five boroughs are prepping...
Read more
Entertainment & Arts

THIS Morning fans were delighted as Holly Willoughby returned to the show after a week off today – but couldn't help but notice something. The...
Read more
Entertainment & Arts

Sources tell TMZ the couple will have a real wedding ceremony in Italy in the future NEWYou can now listen to Fox...
Read more
Entertainment & Arts

James Argent looks slimmer than ever as he’s mobbed by 1,000 female fans

JAMES Argent looked slimmer than ever as he performed in front of 1000 delighted women. The 34-year-old, who has lost a whopping 13 stone, took...
Read more
Entertainment & Arts

It was a night of redemption at the Billboard Music Awards on Sunday night.First, there was country star Morgan Wallen — who had been...
Read more
Entertainment & Arts

Billboard Music Awards 2022: Who’s performing, hosting and how to watch

The Billboard Music Awards will help to tie a bow on the 2022 awards season Sunday night.For the second year in a row,...
Read more
Entertainment & Arts

Selena looks for love on 'SNL' NEWYou can now listen to Fox News articles! She's looking for love in all the...
Read more
Entertainment & Arts

MYLEENE Klass has opened up on the sweet moment she first met Carol Vorderman as a child - and shared a set of throwback...
Read more
Entertainment & Arts