Most smokers diagnosed with head and neck cancer were still puffing on cigarettes two years after treatment, a new study finds.

Researchers at the University of Minnesota, in Minneapolis, tracked 89 people in their 60s who smoked at least five cigarettes a day when they were diagnosed.

Of the 61 who were still alive two years after treatment, as many as 38 — or 60 percent — were still smokers.

The researcher team suggested many failed to give up smoking because they went ‘cold turkey’ at diagnosis — cutting out all cigarettes — risking a relapse. They called for smokers who were suffering from cancer to be offered counseling and medication to help them quit the habit.

Smokers with the cancers were three times more likely to quit in the first six months after diagnosis than at any other time, they said. 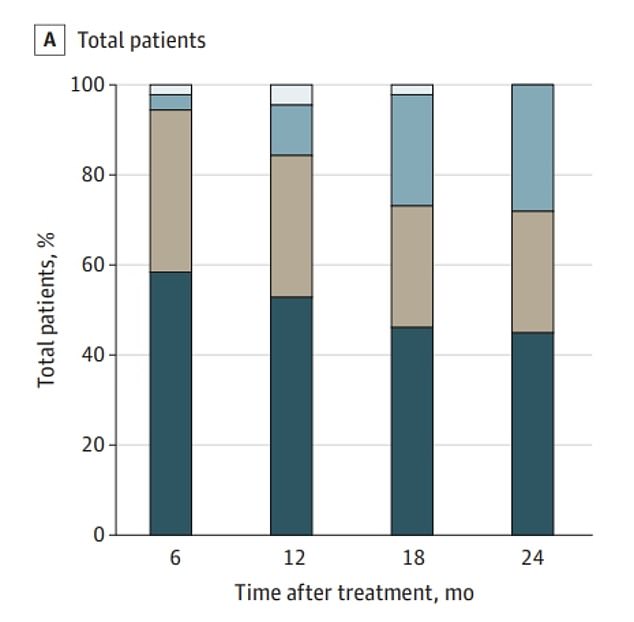 The above shows the proportion of patients diagnosed with head or neck cancer who were still smoking (dark blue), had stopped smoking (brown) or died (light blue) from six to 24 months following treatment. All had smoked at the time of diagnosis

About 66,000 Americans are diagnosed with head and neck cancer every year, estimates suggest, with up to three in five surviving for half a decade after diagnosis.

Tobacco and alcohol both raise someone’s risk of suffering from the diseases, the Centers for Disease Control and Prevention says.

But occupational exposures — such as to dust or asbestos on building sites — or catching certain viruses can also raise the risk.

What is head and neck cancer?

Head and neck cancers include those that start in several places in the head and throat.

These can include the sinuses — spaces behind the nose —, the tongue, the larynx or voice box, and the roof of the mouth.

About 66,000 Americans are diagnosed with these cancers every year, estimates suggest.

Survival rates show up to three in five will survive for half a decade following diagnosis.

Symptoms of the cancers include the following:

Scientists say alcohol and tobacco are the major risk factors for the cancers.

But occupational exposures — such as to dust or asbestos on building sites — and catching certain viruses could also raise someone’s risk.

In the study — published Thursday in JAMA Otolaryngology — scientists tracked patients who came to the University of Minnesota’s head and neck surgery clinic between 2009 and 2017.

Participants had been smoking for at least 16 years on average, and had attempted to quit about five times.

In the first six months after surgery 32 smokers quit (32 percent), but 52 continued to use cigarettes.

By the two years mark of the patients still alive there were 23 (40 percent) who had smoked at diagnosis but since quit.

Over this period eight smokers who managed to quit later relapsed.

A total of 27 patients died.

The study did not look into the methods smokers used to drop cigarettes.

However, the medical researcher who led the study, Dr Tyler van Heest, and others wrote in the paper: ‘Among active smokers with throat and neck cancer, prior tobacco use cessation attempts are most often un-assisted “cold turkey” attempts.

‘An intervention combining cognitive behavioral therapy and [medication] was the only intervention to show significantly higher smoking cessation rates compared with a usual care control group.’

Smokers who successfully quit the habit had used cigarettes for about 16 years on average, and were having about 12 cigarettes a day when they were diagnosed with the cancers.

They had tried to quit about 10 times previously, with the longest time they went without cigarettes being a year and one month.

For comparison, among those who did not quit they had been smoking for 28 years on average, and were having 18 cigarettes a day.

They had tried to quit about five times previously, with their longest period without cigarettes being 306 days.

The study also found smokers were most likely to try to drop the habit within the first six months of diagnosis.

The scientists suggested this may have been because they were motivated by the recent diagnosis, and were getting less enjoyment or ease from smoking.

They added that cigarettes could also be triggering pain in the throat due to the impact of chemotherapy and other cancer treatments.

They concluded: ‘The results of this cohort study suggest that a significant proportion of patients with head and neck cancer who are daily smokers at the time of diagnosis continue to smoke after treatment.

‘Those who successfully quit smoking were most likely to do so in the first six months after treatment, which could potentially serve as a preferred window for smoking cessation interventions.’

JetBlue goes hostile in bid for Spirit after $3.6B offer rejected

Fitness trainer Chontel Duncan, 32, had five babies in less than six years After giving birth to her youngest, she managed to get in...
Read more
Health

Two more people have been diagnosed with monkeypox in UK in cases not linked to previous infection as disease spreads and hunt for their...

HEALTH NOTES: More than half of patients put up with poor healthcare… and they’re more likely to complain about postal delivery issues

More than half of patients who receive poor medical treatment don't complain.In fact, a survey of 2,500 Britons found that were more likely to...
Read more
Health

Family who can’t get an appointment with an NHS dentist flies 6,000 miles to BRAZIL for ‘cheaper’ check-ups

Stuart Woodmansey, from Yorkshire, hasn't had an appointment 'for years'Brazilian-born wife Kedma can't register herself or son Jacob with a local dentist It means...
Read more
Health

Worldwide, the number of mysterious hepatitis cases under investigation among children has reached 450, the European Center for Disease Prevention and Control said this...
Read more
Health

The cost-of-living increase is forcing patients to avoid buying life-saving medications and equipment, as staff warn the crisis is adding additional pressure to the...
Read more
Health

Two cases of monkeypox identified in England, the UK Health Security Agency announced.The two cases are unrelated to a case found on 7 May,...
Read more
Health

DR ELLIE CANNON: My cancer is terminal… so when can I tell my doctors I am ready to go?

I was recently diagnosed with a very rare, very aggressive incurable cancer. I've been referred to palliative care, but I'm often in so...
Read more
Health

Tens of thousands of women are unable to get their hands on Oestrogel There is a critical shortage of Hormone Replacement Therapy across Britain...
Read more
Health

It is the miracle drug which can ‘turn off’ the cystic fibrosis, but is the ‘Holy Grail’ medicine also triggering depression and suicidal thoughts?

Breakthrough jab to protect over-60s against E. Coli bug behind urinary infections which affect more than one million Britons each year

People over 60 could receive a vaccine to protect against urinary tract infectionThe inoculation will protect people from the E. Coli bug which is...
Read more
Health

Obese children are more likely to lose weight if they live near a grocery store that sells fresh fruit and vegetables, study finds

New York City has been offering tax breaks to stores selling more fresh food since 2009 — after finding a quarter of its youngsters...
Read more
Health

Superdrug has been accused of “cashing in on” on women's “frustrations” over NHS failures to diagnose them as perimenopausal after the health retailer launched...
Read more
Health

The Tar Heel state reported that it had confirmed nine cases of mysterious pediatric hepatitis on Wednesday, doubling its previous totalThere have been more...
Read more
Health

Anti-drug addiction website used by 300,000 people a month to find treatment could lead to DEATHS because it has ‘invalid’ information, doctor claims –...