A young Celtic fan was savagely taken out by a steward during their Scottish Premiership title celebrations.

The Hoops lifted the trophy in front of their home supporters after a comprehensive 6-0 victory over Motherwell meant they finished the season in style.

But one Celtic fan was left rather embarrassed immediately after the match when he darted onto the pitch.

The young boy’s sprint onto the field of play was cut short by a steward who stretched out his leg to trip the pitch invader.

And the Sky Sports cameras caught the moment as it happened directly behind where their pundits who were situated on the touchline.

Reacting to the clip, one supporter said: “👀 What job this man is doing! 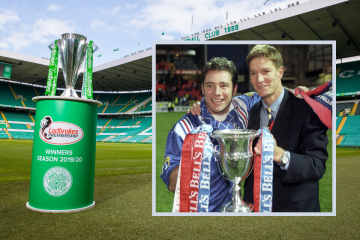 “Even the stewards post-match are still fired-up by the gaffer’s influence!🍀🏆🍀✊#Angeball #ClearedHisLine .”

Another added: “Even our stewards are brilliant – Champions League stewarding .”

And a third said: “Ange will be signing that security guy up for next season.”

Celtic finished the season four points clear of Rangers as they regained the title they lost to their Old Firm rivals 12 months ago.

But all is not lost for Giovanni van Bronckhorst’s men as they still have the Europa League final to contest.

Rangers booked their place in Seville with a stunning 3-2 aggregate victory over RB Leipzig.

They will take on Eintracht Frankfurt in the final on May 18 – not only for the Europa League title – but also for qualification into next season’s Champions League.

In Wake of Buffalo Shooting, Calls for Accountability for Online Platforms

Crystal Palace could fly to Merseyside just HOURS before crucial Premier League clash against relegation-threatened Everton – with club worried players’ sleep will be...

Crystal Palace face Everton in the Premier League at Goodison Park on ThursdayPalace have fears their sleep could be disrupted by Everton fans the...
Read more
Sport

Maybe Joe Judge really wasn't kidding when he included himself as a possibility to take over offensive play-calling for the Giants after firing coordinator...
Read more
Facebook
Instagram
Linkedin
Mail
Twitter
GranthshalaNews